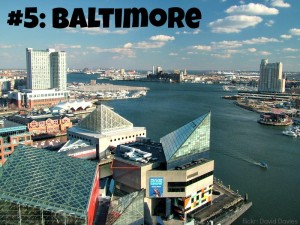 Whether you enjoy art, music, or history, Baltimore seems to have festivals every other weekend.  According to Forbes, Boston’s Hon Fest is retro cool and not to be missed! As a Mid-Atlantic city located south of the Mason-Dixon line, there is a unique blend of Northern and Southern American culture and traditions. Baltimore even has its own dialect called Baltimorese – which makes the locals’ speech unique and distinctive. The National Aquarium is also located in Baltimore – with over 16,000 animals and 600 different species, so be sure to check it out!

With tons of trendy cafes, a diverse restaurant selection, and 35 different historic neighborhoods, Phoenix comes in at #4 on our Hippest Cities To Move To. Though spending time outdoors is difficult in the 100+ degree weather in July and August, there are plenty of trails to hike, rivers to float down (try the famous Salt River!), and Spring Training games in March and April to check out. According to USA Today, the Roosevelt Rows Art District is the best neighborhood for hipsters – with plenty of coffeehouses, galleries, and boutiques. Arizona State University (one of the schools by population in the country) has 4 campuses in the Phoenix-metropolitan area – keeping the average age of residents, and the price of rent, low during the school year. Phoenix is sure to be an adventure, no matter what!

Each year, hundreds of country musicians travel to Nashville with hopes to make their mark in the “Music City”. Downtown is covered with an abundance of excellent restaurants, local shops, and entertainment for all ages along the Cumberland River. According to Travel and Leisure, Nashville is home to a large population of fitness enthusiasts – which is why you can take a jogging tour through the city. Nashville is also home to multiple music festivals each year, and to some of the South’s best coffee shops, like the award-winning Crema. It’s no wonder that so many hipsters fit in in this beautiful city! 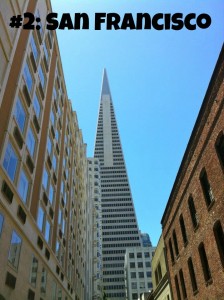 Fisherman’s Wharf, Palace of Fine Arts, endless parades, and Dolores Park all make up just a portion of why San Francisco is so cool and trendy. Additionally, San Francisco recycling efforts are second to none, with a goal to have zero waste by the year 2020. According to Travel and Leisure, the Mission district is home to the best cotton candy at Batch Made market, and bowling and delicious cocktails at Mission Bowling Club.  If you enter the city from the north, you can drive in on the famous Golden Gate Bridge, make your way east to drive through Chinatown to catch a ride on a cable car, and then shop till you drop at Union Square. Avoid city traffic by taking BART or the Muni, and check out one of at least 10 local farmers market! There is always something to do in this beautiful foggy city. 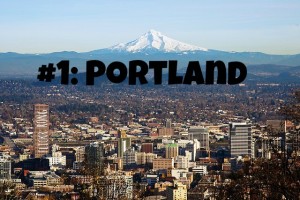 There’s a reason Portland seems to fall at the top of everyone’s hippest cities – and that’s because of its unique culture. According to Forbes, the city’s First Friday Art Walk is the best place to catch a taste of Portland’s artsy side.  If you’re looking to move to the parts of town with plenty of history and culture,  find the arts in the Northeast and Southwest neighborhoods, and most of the boutiques and bars in the Southeast and Northwest. Portland was recently named one of America’s best beer cities, with 69 breweries in the Portland-metropolitan area alone. What’s even cooler, is that Portland even has bike-powered pub crawls. Portland is frequently rated the most bike-friendly city in America, with the highest percentage of  two-wheeled commuters. This makes for better commutes for everyone.

Did your favorite city make it on the list? Do you have a city to add to the list? Leave your thoughts in the comments below!