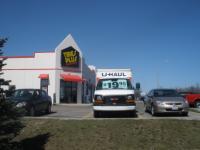 Trailer Rental & Towing in Waukegan, IL at Tires Plus

Moving to or from Waukegan, IL? U-Haul cargo and enclosed trailers are intelligently designed to protect and secure your precious belongings, while our open utility trailers are perfect for hauling building supplies, landscaping materials or bulky items. U-Haul car trailers have EZ load ramps for effortless loading of vehicles while our motorcycle trailers are lightweight and easy to tow. Get FREE trailer rental rate quotes in Waukegan, IL 60085 today.

Cargo trailers in Waukegan, IL are lightweight, aerodynamic, and engineered for better fuel economy which makes it easy to tow behind any vehicle. Millions of families use our enclosed cargo trailers to move every year. U-Haul has a large selection of enclosed trailers to rent in-town or one way, review our cargo trailer sizes and reserve a trailer rental online at Tires Plus!

Moving cross-country with your vehicle on a car trailer is a smart way to save gas and eliminate miles of wear and tear on your vehicle. Our Tow Dolly is a low-cost option for towing front wheel drive vehicles, while auto transports are ideal for long distance moves. Both car haulers fit most sized vehicles in Waukegan, IL and are also an economical alternative to calling a tow truck in the case of a break-down. Whether towing behind a U-Haul moving van or your own personal vehicle, you can rent a car hauler for both in-town and one way moves.

Online reservation and 1-800# were a night mare.....I talked to 6 different people, got 6 different stories, they all wanted to tell me what I needed, noone would listen to what I really needed. ???? your Chicago area dispatcher finally straightened it out....and no, it wasn't my inability to communicate....

I requested to have a half dozen protective blankets but they weren't available upon my arrival. I survived. But why have it as an option when I'm making a reservation if it's not available?

Right front tire of rental truck was moderately low on air pressure. Otherwise, it was a good rental experience.

No ramp on truck,the truck didn't have a pull out ramp on it, needs a load ramp.

During initial contact (phone) the representative was rude and seemingly not concerned bout renting a vehicle or my needs. When I got to the store the same representative to my ID and Debit card, had me sign the contract and pointed the vehicle out. He didn't even come out and do a walk around, verify the gas or provide any other courtesies. Upon return a new representative did go out to check the vehicle. Recommend they become more customer/user friendly.

Super friendly service!! Seamless online to store pick up. Will use again!!!

I particularly like dealing with Raj at this location. He is very smart, professional, and friendly. The inventory has been sufficient and reliable for my needs, which have been growing, thanks be to God, and I have now rented from this location a number times. Glad to see the ingress/egress situation improving amidst all the construction!!! Tim Goebel

The staff was extremely helpful both over the phone and in person. Equipment and contract were as-promised, no surprises which is great for a change! Clone these guys!

Dropping off experience was horrible & took forever. Very difficult to find the place and we had to drop off after dark/after hours. When I'd called before closing to confirm it was ok to drop off after hours, the clerk seemed to be surprised I was dropping off there, and questioned it at first, mumbling something about construction. He then must have looked at something, confirming my drop off, as he stated my last name. Since I'm not from the area, I'm not 100% familiar with everything. I did know, though, from several trips to the area over the last 2 months, that there is construction on many area roads, so when the clerk briefly mumbled the word construction, I sort of assumed he must've been referring to that. I was wrong though, as there is construction of an Aldi store right next to the drop off location. Even though my gps system told me "arrived", all I could see was a McDonalds on the corner. After extra time wasted, extra miles driven, and driving in circles, I finally saw a small sign that was not lit up and very difficult to see, that led me down a washboard gravel "construction" road to the Tires Plus where my drop off location was. Never had the clerk told me how CRAZY hidden this was going to be & how difficult it would be to find. I was exhausted from a day of moving and NOT what I wanted to spend my time doing! I was charged for extra mileage for my driving in circles to find the darn place!!! The clerk could have easily explained how difficult it might be to find the place, and that I might feel like I was driving into the land of no return, to find it! Easy things that could've prevented much headache. Clerk also didn't mention going to Uhaul.com to go through the process of dropping off after hours. Taking pics on my smartphone of odometer gas gauge truck cab and bed, blahblahblah......so annoying. Wouldn't allow me to take and save the pics and then upload them to online drop off procedure. After about 1 1/2 hours from start to finish, and I'd already dropped my key in the return box, & it wouldn't allow me to access pics from my photos, I said "screw it" ! and called it a night!

The whole experience was terrific. Price point was very reasonable, and support / counter staff at the pickup location was incredibly helpful and polite. I've already recommended to a colleague. Thank you for your help!

Truck was waiting for me on time it was clean. Tire plus owner is very friendly and helpfull

A good effort has been made to access through construction. Letting others know to expect to use construction access would help them. Staff is pleasant and helpful.

Attendants had trailer stuck to something. As i tried to tow it from the spot they indicated, i couldn't move. Initially they didn't offer to help at all until someone i parked and left my vehicle. They had me help them move the trailer by hand. It was like none of them had ever even worked with trailers before. they were rude and seemed frustrated with me! also all the information i filled out online was gone when i showed up so i had to start from the beginning as if i had never made a reservation. overall, they ended up wasting my time. I was over an hour late to my appointment because of this ordeal. The trailer rental was suppose to make that day easier, and it only made it worse. I'd never return to that location and id tell everyone to stay away.

I requested a dolly, and didn't receive one. I thought the trucks had a lift gate to load things that need to go on a dolly. Choosing a different moving truck company for the rest of my move.

Overall great experience, Very helpful staff. Wash the windows inside and out,

They gave us a different truck than was on the contract. Different amount of miles.