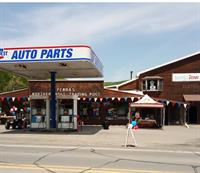 Moving to or from Westfield, PA? U-Haul cargo and enclosed trailers are intelligently designed to protect and secure your precious belongings, while our open utility trailers are perfect for hauling building supplies, landscaping materials or bulky items. U-Haul car trailers have EZ load ramps for effortless loading of vehicles while our motorcycle trailers are lightweight and easy to tow. Get FREE trailer rental rate quotes in Westfield, PA 16950 today.

Cargo trailers in Westfield, PA are lightweight, aerodynamic, and engineered for better fuel economy which makes it easy to tow behind any vehicle. Millions of families use our enclosed cargo trailers to move every year. U-Haul has a large selection of enclosed trailers to rent in-town or one way, review our cargo trailer sizes and reserve a trailer rental online at Courtney's Auto Sales!

Moving cross-country with your vehicle on a car trailer is a smart way to save gas and eliminate miles of wear and tear on your vehicle. Our Tow Dolly is a low-cost option for towing front wheel drive vehicles, while auto transports are ideal for long distance moves. Both car haulers fit most sized vehicles in Westfield, PA and are also an economical alternative to calling a tow truck in the case of a break-down. Whether towing behind a U-Haul moving van or your own personal vehicle, you can rent a car hauler for both in-town and one way moves.

The staff at my pick up location were great! Unfortunately, the original pickup location decided not to show up for work which caused an inconvenience for me after I was already on the road. It was also ridiculous that I could not drop the trailer 2 miles from my house because the dealer was in PA and not Delaware.

Need more professional and courteous service. Child behind the counter and answering the phone. Adults very rude to me. Had me in tears at one point to the extent that my daughter had to call the 800 number where Matt was very help in resolving the issue.

I had checked in online to avoid being in the store for an extended period of time because of COVID-19. When I entered the store I told them I was there to get the truck, one employee was standing around and the other one was on the phone (no one was wearing a mask). No other customers were in the store when I entered, 3 other customers came in and were waited on before me. When I finally got waited on the only 2 employees were teenagers and they didn't know how to finalize the rental, the owner arrived and finished things however was rude. I was given the key to the truck but was not even told where to find it. I had to go back in the store and get someone because the truck was filthy. The owner came out to look at the truck and told me she would get me a broom. She came back out and did attempt to clean it but not very well. I had to take the vehicle the way it was, still very dirty. During this time of COVID-19 I felt very uncomfortable and had to wear a face mask and gloves for the move. I should have been able to pick up the truck quickly however the whole process took close to an hour, of possibly being exposed to this virus. I will be sure to let all my friends and family know of my experience with the u-haul site.

We had no guidance what so ever on what we had to do!!!!!

When I reserved the trailer online, I specified that it would be a one way rental. The pick up in one state and returned in another. I was quoted a price of $89 for four days, so I reserved the trailer on Sunday. I was called back almost immediately from UHaul, as the pick up site we chose didn't have the right size trailer. They said if we were willing to pick up at a different site, they could get us a slightly bigger trailer at no extra charge. I agreed. The computer defaulted to a local rental instead of an interstate rental, apparently. When I paid for the trailer on Tuesday, it was less than expected, but I just assumed that it was because that particular dealer was in a small town. I commented that it was going out of state, at least 3 times. The clerk didn't want to run the credit card until my husband picked up the trailer, to give us extra time to return it. I assured her we were driving out of state on Thursday, and were only a half hour from the return site, so she could run the card. When we returned the trailer on Friday, we were charged another almost $200! We were told that it had been billed as local, so we needed to pay to have the trailer returned to the original UHaul. I showed the receipt where we paid, but was told there was nothing they could do. I called the original UHaul vendor, and was told that I had made the mistake. I told them that I had verified at least 4 times that the return place was in a different state, but the clerk insisted the mistake was mine. I pointed out that I had specifically talked about our traveling out of state on Thursday, and our plan to return the trailer on Friday morning to the return site a half hour away - so even if the reservation was for local, that should have been a red flag that it was going out of state. She spoke sharply to me and told me not to get snippy and then said I was never to call back there again and she hung up on me. I called the UHaul number, and spoke to a service representative who promised to make it right. She said the regional manager would be calling me. He did, and commented that the original vendor had called him on Wednesday to tell him there was a mistake, as it had been booked as a local, but was going out of state. Although they had my cell phone number (and my husband's cell phone number) they didn't bother to call either of us to let us know so we could return the trailer. I pointed this out to the regional manager, saying that they took away my choice to not pay the extra. I told him I would have returned the trailer had I known how much extra it would be. He apologized, but was only willing to refund a portion of what we were charged. My recommendation is DO NOT USE UHAUL'S ONLINE RESERVATION PROCESS!!! The system apparently doesn't work. Better yet, don't use UHaul - they advertise one price but charge another, and their vendors are rude and don't own up to their mistakes. And even when they find a mistake, they wo

As always easy p/u and return the folks are great.

Danielle at Ackleys is great but if she's not available there's no one else as back up to answer questions & I think there needs to be. Trying to reach anyone at that shop was difficult but they just reopened & getting things squared away (understandable, but get a VM that is set up to leave messages instead of "this mailbox is full"). There were 2 other locations I considered closer to my house but the guy in galeton NEVER answers or returns calls & the one in Wellsboro didn't have what I needed on a weekend (understandable) but they were very helpful and told me to call Ackleys in Westfield.

This service center changed their location without notification, it did not match my reservation confirmation and the contact number provided was also erroneous since it only led to a full voicemail. This caused a delay in my pick up of 1.5 hours and paid moving helpers contracted through Uhaul were also waiting at my home during this time. The personnel was extremely rude, they did not have my complete reservation of moving pads, and the truck was dirty. I will not return here and do not recommend this pick up location.

The facility was very clean and so was the truck. The customer service rep was very helpful and friendly. She was also very professional. I would recommend Courtney's Auto Sales for U-Haul rentals every day of the week and twice on Sundays. In other words, I would highly recommend them to someone who is need of one. Thank you for your professionalism and courtesy. God bless you.

we rented the U-Haul online and rented it for 8a.m. and received confirmation of the pick-up time. The location did not open until 9a.m. We had people at our house waiting to help us load the truck. This was very inconvenient.

Very friendly gal at this location. Asked way more questions than other locations I have used.