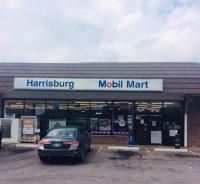 Moving to or from Harrisburg, OH 43126? Get FREE truck rental rate quotes at Harrisburg Mobil. rental trucks are specifically engineered from the ground up to assist moving families, not freight. Our moving trucks have more safety features than other moving trucks in the industry including gentle ride suspension and high visibility mirrors to assist the driver. Whether you are moving a smaller apartment or a large four-bedroom house, truck rentals in Harrisburg, OH will provide you with the moving truck rental you need to get from point A to point B. Find the perfect size moving truck to assist with your move, is home of the $19.95 rental truck!

Simply click on each moving truck shown above to view individual truck specs including: safety features, towing capacity, fuel economy and of course, the available space-per-truck size. Each rental truck is individually priced to help save you money, time and energy on your move to or from Harrisburg, OH.

Very easy to park and drop-off- very pleased with the experience!

Was told twice that I could return truck to different locations when in fact I could not. So because of this I had to drive truck back 60 miles costing me more money and more time. I will not rent from uhaul again.

Even though his computer wasn't working and he had to do everything on his cell phone with a very busy store, the man at the counter was still very helpful and got us our truck in a timely manner.

The trailer wasn't as clean as some I've rented in the past. The attendant was courteous with the documentation, but didn't help at all with hooking up the equipment - I was on my own once the paperwork was done, so checking that I had hooked up the equipment properly was entirely on me.

The gentleman we turned the van in with clearly did not know what he was doing. He told my husband the boss would be back in 30 minutes, words you don't want to hear after a long move, when you are tired, hungry and cranky. My husband left his contact info and told the kid to call if they needed anything else. We then left for our new home. The location to drop off the truck was convenient, though!

The clerk was very surprised we had reserved a truck. He was the only one working in the store at the time (which was also a gas station) and had other people to tend to besides us.

Person was rude because I had to pay in cash instead of debit card. The back of the truck was full of leaves and dirt I had to sweep it out myself .

This man was rude and act like we were a burden to him. It took 25 mins to get truck 45 mins to return the truck. Very rude

The staff at this location were very rude and there was a major language barrier. When they didn't understand my English they became aggravated and started getting loud with me. The older gentleman told me he didn't know how to use the Uhaul machine and that I'd have to wait, I waited patiently for the younger worker to return from the bank. Once he returned from the bank he didn't know how to use the machine either. It took almost an hour for me to get the keys to the Uhaul. During this time, he told me my card would not work to rent the Uhaul and asked if I had any other cards. I told him I didn't want to use another card and he insisted that my card was the issue. I eventually gave him another card and it didn't work either. He eventually had to call someone from Uhaul and was walked through the process of running a credit card. Once he was walked through the steps, he still used the card I asked him not to use. Even after getting the keys, I was not given any paperwork. I thought I was supposed to get something telling me where the gas, mileage and any damage to the truck prior to me taking the truck. He asked me to look over the truck for damage and I told him a few spots I saw that were scratched or dented and he said "yea that's from another time" but never documented any of it. I was concerned that some of the damage could have been blamed on me as I didn't receive anything or sign anything to receive the truck. I was also given a confirmation to pick my Uhaul up at 78 Cromley Rd. and on the day I was to pick the truck up I was told my location had changed and that I would have to now go to Harrisburg to get it. I spoke to a supervisor and was advised I would be receiving a $50 credit being that my truck wouldn't be where I was told it would be on the day I was supposed to pick it up. I have reviewed my statement and I was not given a $50 credit like I was told I would. I would like for someone to contact me or I will be contacting the company at some point later this week.

Was told not to use the app to check out. The gas station is no longer a Sunoco but a mobil so app instructions were confusing. I had to drive 20 more minutes out of the way for the one way option which added to my mileage rather than the drop off being in the town I moved. I was told on the phone the day before that he drop off would be in my town. Not a big deal overall but made things confusing.

The cashier that was there knew nothing about dealing with the uhaul side of things....took a while for him to understand what an appliance dolly was and where it would be in the store....to me it should have been in the truck waiting for me to pick it up

We was over charged. When dropped the uhaul off at 6:30pm and they didn't check it out till 9pm so I was charged another 18.99. The people who was there had no idea what they was doing and you couldn't even understand them! I'd never rent a uhaul again from there!

Teach them customer service, respect for women, it took me over an hour for them to do a si,Pyle form. Did not have a printer. I was charge for a trailer that they quoted me a price of 19.95 then it went to 29.95 by the time I walk out it was 32.00. And couldn't use it I didn't a the right size trailer ball and they had none that I could rent. Traded this in on a truck UHaul was charge 86.00 . The morning man didn't want to deal with it so he told me 2 days in a row to come back at 2:00. 1st day I did. It was a night mire experience. I will NEVER rent from U haul again and will be sure to put this on social media! If these people aren't put out of business with UHaul!!!!!

When I arrived, it took me approximately 45 minutes to be able to leave with the 5 x 8 cargo trailer that I had reserved. The attendant had no idea how to get me checked out. At one point, I was actually telling him how to fill out the computer form. At the point where he said I was good to go, I left, hooked up the trailer and did what I needed to do. I never received any paperwork. When I got home to load the trailer, I received a phone call from UHaul asking if I was still going to pick it up. I already had the trailer. When I returned the trailer, the attendant informed me that he hadn't completed the rental and I needed to provide me with more information. This went on for another 20 minutes of him failing to fill out the online forms with my information and collecting my payment. I finally gave up and just paid in cash and left. I was extremely frustrated and will not use this location in the future.

There was no appliance dolly which I had paid for.

I am not sure how many vehicles this location rents, but I was pleased that they contacted me the day prior to my rental to ensure my vehicle was at this location at the time I wanted it. As it turns out - mine was the only one on the lot. The check-in process took less than 10 minutes with the only issue being that the clerk could not get a paper version of the agreement to print. Problem was easily solved via emailing a copy of the contract.

i think everything here went well

I just think that U-haul should consider having more of the Sport trailers. They are a good size for me and probably for many people, plus more aerodynamic, the problem is it was relatively hard to find one nearby where I was located (central Florida)