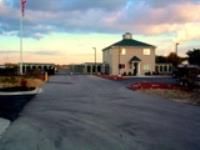 Moving Truck Rental in Newport, MI at All Star Storage

Moving to or from Newport, MI 48166? Get FREE truck rental rate quotes at All Star Storage. rental trucks are specifically engineered from the ground up to assist moving families, not freight. Our moving trucks have more safety features than other moving trucks in the industry including gentle ride suspension and high visibility mirrors to assist the driver. Whether you are moving a smaller apartment or a large four-bedroom house, truck rentals in Newport, MI will provide you with the moving truck rental you need to get from point A to point B. Find the perfect size moving truck to assist with your move, is home of the $19.95 rental truck!

Simply click on each moving truck shown above to view individual truck specs including: safety features, towing capacity, fuel economy and of course, the available space-per-truck size. Each rental truck is individually priced to help save you money, time and energy on your move to or from Newport, MI.

U-Haul cargo van rentals and pickup trucks in Newport, MI are perfect for home improvement projects, deliveries and other small loads. Rent cargo vans or pickups to save money on local moving or deliveries. Cargo van and pickup truck rentals are popular with local business, college students and smaller housing moves in Newport, MI 48166. Our moving van rentals include air conditioning, rub rails to protect your belongings and come equipped with a hitch to tow a trailer rental. is the home of the $19.95 cargo van rental in Newport, MI, reserve a van for your moving needs from All Star Storage!

This is a storage facility that acts a uhaul dealer as well. Unfortunately this place is the only place near me that had the truck i needed. A gentleman helped me with the contract when i arrived. All done online on his cell phone. I was charged with all kinds of options i didnt ask for. Had to call U-haul direct to correct overbilling. I was told he would be there the following day when i dropped off the truck to settle the bill. He was not. NO ONE WAS THERE. I had to call main office and uhaul to get drop off instructions. What a pain in the neck! Never will i rent a Uhaul teuck again except from a Uhaul dealer. Allstar Storage was absolutely TERRIBLE when it came to service and customer satisfaction. 30 minutes to pick up truck 60 min to drop off. Unbelievable.

This was the worst U-Haul experience I've ever had. I had a scheduled time for a car hauler pickup and no one was at the office. I waited an hour. I was also told by the U-haul rep online that the location would have a ball hitch for the trailer. Just to make sure I called the location multiple times and left a message with the answering service and asked if they would call me back to verify. I was never called back so when the office manage did finally arrive he informed me that he had no ball hitch to rent causing me to have to drive to another U-haul to rent the ball and come back. Meanwhile my son who was just in an accident had to wait hours for me to arrive on the expressway. I also asked when we were finalizing the initial paperwork that I would like to drop the trailer off at the Monroe, MI location. When I was done I drove to the Monroe location and they had to refuse the trailer because the documentation was done wrong. I had to instead drive it back out to the destination of origin (ALL STAR STORAGE in Newport MI). I had an unnecessarily very long and frustrating day and would like a call back to discuss compensation for the gross mismanagement.

a day. Dealer Eric said there was nothing he could do about the price and I was to call the regional manager Todd Estes in Monday for a credit. I left a message with Todd Estes in 8-6 with no return call. I tried Todd Estes in 8-7 and received his voice mail saying he was not available until 8-13 and to call a different number which is a wrong number. All I want is credit for the amount we were quoted when I made the reservation and not the amount I was charged. I can dispute with credit card company if you prefer / Martha Crum

Train employees so they know how to use the computer system. Have more than one employee so you don't have to wait for them to finish an oil change customer before they can help you. This has happened several times at this location.

Was Not open when I needed to drop off.

The equipment was clean but missing the rubber safety chain hook retainers. Billing was double the stated amount and since it is through a central point I have not been able to get a response to e-mail or telephone inquires.

It took almost an hour to get the paperwork done and then I had to go get a different ball for my hitch and they couldn't change it out for me so then I had to buy a brand new hitch and ball from a different u haul location down the road.So overall that trip before I could even hook the trailer up took an hour and a half.It was the worst experience I have ever had!!

I was charged for 3 days when it was returned in 2. I want my money back for that one day.

The employee had to call someone because he did not know how to rent to a customer. Said he normally worked at a different location. After the trailer was hooked up he realized most of the lights didn't work. He didn't know what to do so he sent me down the road with the trailer to the U-Haul owned store where I waited an hour to be told to go back to the place I rented from to exchange the trailer. When trying to leave we realized my truck lights were left on while the tech tried to diagnose the trailer. He did give me a jump start. It took approximately 3 hours to rent a trailer.

The people at this location were very helpful and accommodating . Service in returning the truck was quick and friendly. I would recommend this location to anyone renting a truck .

The truck was suppose to be picked up in Monroe Mi instead of Newport Mi which is 5 miles out of the way. They said the truck was brought in from Toledo, which would have been easier to go to Monroe.

Well u can make sure everyone knows the procedure of checking a truck in!

have someone that knows what the heck they are doing

This was not the drop-off location.

The equipment was clean, but the battery died the next morning and I ended up having to have the towing guys come out not once but twice to give me a jump. This was a very bad morning and I had to pay for the gas while it sat there to charge. I'm not a very happy customer.

No sign on telegraph road..Hard to find. Grass and weeds between road and building making it hard to see

The storage place had a sign in the window that said to make contact with the person at the oil change place that was located on the front driveway as you entered the property. There was only 1 person working there and he was busy - I had to wait to get the truck and finish the paperwork.

I rented a trailer for 2 days (Sat, Sun). I was told if I returned the trailer a day early (Sat by 4p) I would only be charged for 1 day. I returned it before 4p. they had already closed and nobody was there. I was charged for 2 days. I called at least 5 times over a 1 week period and got no return call. I went to the location and spoke to the only person there and they said someone would get back with me. I called again and left a message. I still have not heard from anybody and I am still owed a day of rental.

had to wait about 30 minutes to get waited on. Their was only one empoyee there he had been waiting on someone and it took forever for him to finish with her. he did not have me in the computer for a reservation. He had to call corprate to find out what to do. Whom ever he spoke with told him to put me down as a walk-in. He was a nice guy but he really didn't seem to care how long he took.

The two gentlemen that were there we're very helpful. Had no issues getting the truck or returning it. A+

When I called the 1-800 service #, she said that someone from the newport location will call to comfirm my order within the hr. I figured that it really shouldn't take that long but that have to give some time line. I waited for 80 mins & then called the location. when the guy answered he gave me another # to call because he was outside shoveling snow. I hung up & called that #. I finally confirmed order & said we would be there in 30 mins to pick up. We went to building & no one was there. I called the number I called 30 mins before & no answer. We finally saw a hand written sign in window about going to other oil business for uhaul. Why wouldn;t the kid say that on the phone? When me & my husband walked in there was 2 young boys talking with an oil change customer about football. That's why he was unable to answer the phone. When they finally got to us & handed us our paperwork. it wasnt even correct, The gas said there was almost 1/2 tank of gas, there was under 1/4. I was very disappointed. Especially it took me 4 phone calls just to get 1 trk that was not being used.. Just sitting in parking lot.