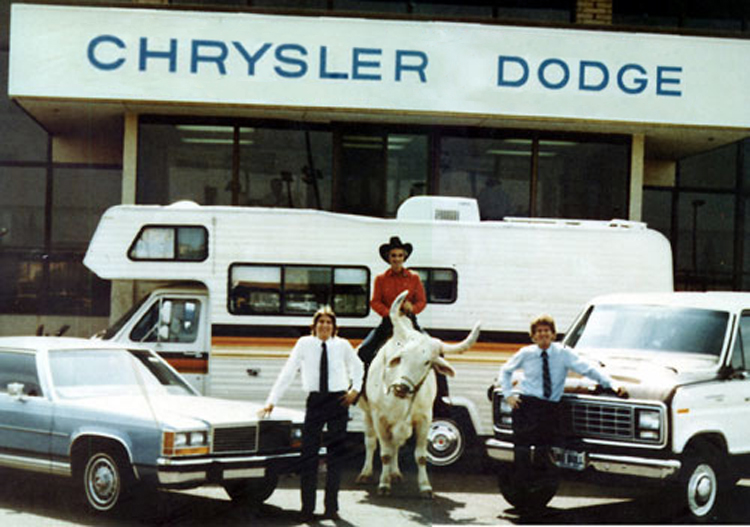 Earnhardt Auto Centers is a group of the most infamous family-owned car dealerships in the southwest. The franchises have experienced wide spead success in part to their charismatic founder and CEO, Tex Earnhardt. Tex was raised on a ranch in Southern Texas and moved with his family to Chandler, Arizona, in 1951. He worked alongside his family to start a small gas station and earn a modest income by selling gas and auto parts. At the age of only 21, Tex was awarded his first franchise, which made him the youngest Ford franchise owner in the U.S. Tex was later asked by the Chrysler Company CEO to open a Chrysler franchise. Tex would eventually acquire many more automobile franchises and he became widely known as the cowboy car dealer. Tex rode a real bull steer in commercials and touted his trademark slogan, "That ain't no bull!". Earnhardt Auto Centers still proudly operates 17 dealerships in Arizona. U-Haul acquired the chandler Earnhardt Auto Center property in 1984. Adaptive reuse building conversions allow U-Haul to promote infill development to meet citizens’ needs while preserving the natural resources and land normally required for new construction. Adaptive reuse also allows resources to be focused on integrating environmentally thoughtful features into the existing building rather than creating waste in the form of demolition and using valuable resources for new construction.

Serving U-Haul customers since 1984, this facility was built through adaptive reuse of an abandoned building. Adaptive reuse promotes infill development in an effort to strengthen communities, with the following benefits achieved at this site:

Energy-efficiency and waste-reduction programs at this facility provide the following estimated benefits each year for this east valley community: