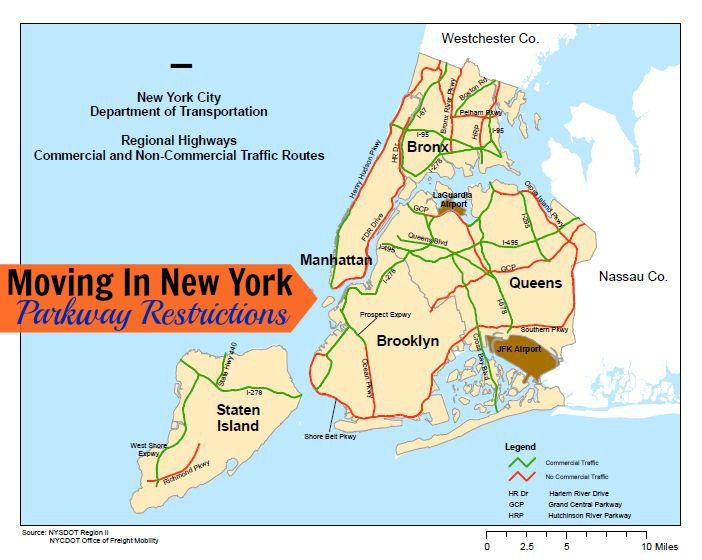 One of the reasons commercial vehicles (including moving trucks) are not allowed on New York parkways is that they were designed for automobiles, and many of the bridges have as little as a 6’11” clearance.  If a commercial vehicle can not clear the bridge and gets stuck,  it can cause serious accidents that result in traffic delays while the vehicle gets removed.  Not to mention you’ll receive a fine and points on your drivers license.  The NYC DOT advises people not to rely solely on GPS units when driving commercial vehicles, but also to keep your eye out for signs indicating whether commercial vehicles are allowed.  You definitely don’t want to end up in a scenario like below!! That can’t be good for your household goods or moving truck.

What should you do about New York Parkway restrictions?

If you are moving in New York, the best thing to do is plan ahead.  Start by downloading this PDF for a complete list of restricted parkways in Downstate New York, and plan your route.  Also, keep in mind that there are other streets in the city where commercial vehicles are restricted, such as portions of Fifth Avenue, Park Avenue and the Brooklyn Bridge.  For a complete list and other information on driving commercial vehicles in New York, visit nyc.gov.

The best advice New York Department of Transportation gives is to stay off the parkways. There are many alternative routes. Staying on the interstates is a good tip as well as paying attention to the “no truck” signs and you can’t go wrong! Contact NY DOT for more questions here or via email at NYMoving@dot.ny.gov.