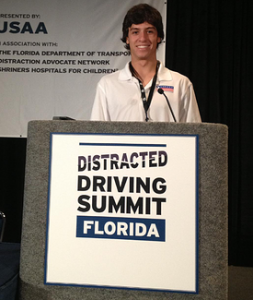 Tristan Nunez is a professional racecar driver, and national spokesperson for distracted driving. Since turning pro in January of this year when Mazda chose him to be a co-driver in their Mazda6 SkyActiv Diesel in the GRAND-AM Rolex Series, he’s made it his mission to use his newly-acquired attention to spread the word about distracted driving. We had a chance to speak with Nunez about why he is so compelled by this cause and how his dedication to end distracted driving is inspiring others across the nation.

Most people understand that distracted driving is a problem on our roadways. What they may not realize is that car crashes are the leading cause of death among teens (source: CDC). As a teen himself, Nunez believes that he can be a positive influence to his close friends, and peers across the nation. “It’s hard to convince teens not to text and drive because we feel we are invincible” he says, “but as a teen speaking to other teens, I feel I have a better chance to get them to listen to me. When I go to the high schools to speak, I show the similarities of the focus needed driving on the racetrack and on the streets.”

Among all of the tips for distracted driving, Nunez believes that one of the most important is to silence your phone while driving to avoid the temptation to check it. “If you hear the chime on your phone that you have a text, your reaction will be to want to see whose texting you, then it’s a snowball effect of reading the text and then answering. It’s best to have 100% focus on driving.” 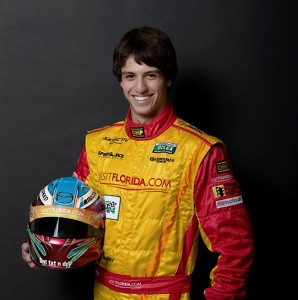 While turning pro has helped Nunez bring attention to his cause, the campaign actually started about two years ago. It was prompted by his own experience of driving in the car with his mother, who, while using her phone to read emails, nearly rear-ended the car in front of them. It was then that he and his brother decided it was time to make a change, and began to use his racecar as a rolling billboard to state the cause.

Nunez continues to take the message of distracted driving on the road by traveling to race locations to promote the message on the racetrack and within classrooms. In 2012, he became the national youth spokesperson for distracted driving. At each event he attends, Nunez hands out bracelets that say: Dnt txt n drv, to serve as a reminder not to text and drive.

What do you think about the difference Tristan Nunez is making in teenage distracted driving? Has his mission impacted your life? Tell us below in the comments section.