Veterans Day is an opportunity for Americans to proudly flaunt the Stars and Stripes and show their appreciation for those who have served.

At U-Haul, the theme of Nov. 11 is practiced every day through its nationally recognized efforts to employ veterans and work with military-friendly organizations. 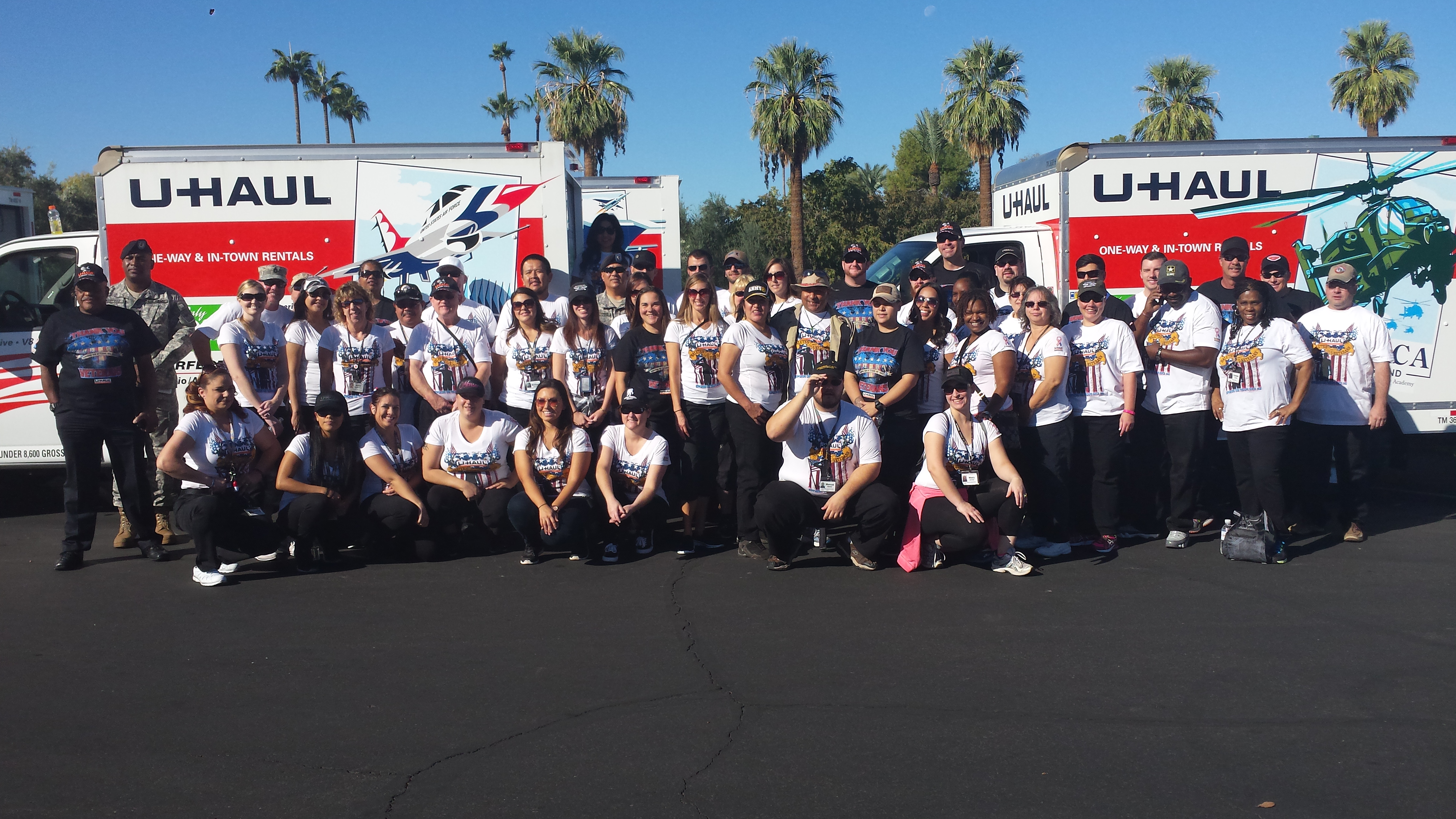 An orange-clad reminder of that allegiance was displayed Tuesday at the annual Veterans Day Parades in New York and Phoenix, where U-Haul trucks lined the streets and team members walked alongside handing out patriotic ribbon magnets and American flags.

“U-Haul is very military friendly. That’s how I got hired – I went to a veterans job fair,” said Tempe Transfer Driver Bob Rivera, who served 20 years active duty in the Army and 10 in the Reserve. The ex-New Yorker did three tours in Iraq from 2003 and 2010.

“Veterans Day, to me, is to be appreciative for the men and women that have served in uniform from World War II to the present,” Rivera added. “A grateful nation should always take care of its veterans. I think about the good we’ve done, but mainly, I think about the friends I lost over there. They’re the heroes. I just got lucky.”

Systems Administrator Bea Parco, who has 30 years at U-Haul, walked in the parade a week after returning from her father’s final resting place in Arlington National Cemetery.

Parco, a self-proclaimed Navy brat with Filipino roots, developed a lasting admiration for servicemen and women as a little girl, while playing checkers and cards with hospitalized veterans and listening to their stories. She now serves as southwest regional president for the Ladies Auxiliary of the Fleet Reserve Association.

“The military influence is one of the main things that has kept me here at U-Haul,” Parco said. “It was a key thing that captured my heart.”

There were many heartwarming moments along the crowded and vibrant Phoenix parade route, from team member Carl White’s rousing, relentless chants of “U.S.A.” to the sight of elderly uniformed veterans waving to those marching in the parade.

“A lot of good memories and a lot of bad memories,” Ingram said of his military service, which included a 15-month stretch in Iraq. “The U-Haul recruiting department contacted me after finding my résumé online. It caught me by complete surprise. I was like, ‘U-Haul?’ Then they made me an offer. And I said, ‘When do I start?’”

“I hire veterans,” Truck Product Manager Jeremy Donohue noted at the parade. Donohue, an eight-year U-Haul veteran, was among the first feet on the ground three blocks away from the World Trade Center on Sept. 11, 2001, as part of the National Guard Infantry.

“Even though I haven’t served in a combat role, I put those guys on a pedestal,” Donohue said. “I donate to veterans charities. I participate in veterans events. Anything I can do. They’re the best people in our company. They show up on time. They know how the chain of command works. And they’re very good at what they do.”

When the parade was over, team members exited the bus at U-Haul headquarters in good spirits despite their weary legs and empty stomachs. Participants were given a certificate for a free meal in the cafeteria where they could satisfy one of those issues.

“It’s always a lot of fun,” Carolina Hickman, an Army veteran in Accounts Payable, said of the parade. “It’s great being around your fellow coworkers, some that you don’t often see. … And it’s nice to honor our veterans – the men and women who have served before us to give us all our freedoms we have today.”