Virtual Unveiling: Pearl Harbor Presents a New View from Above

HONOLULU and PHOENIX (Sept. 1, 2020) — Pearl Harbor Aviation Museum and U-Haul® International are pleased to offer the virtual unveiling of the Ford Island Control Tower renovations and the breathtaking panorama of America’s first WWII aviation battlefield that will soon be available to the public.

While the traditional unveiling is postponed until later this year, renovations to the historic tower are nearing completion and the views from the top are now able to be shared. Watch the U-Haul-produced video of Pearl Harbor’s newest tourist attraction via the YouTube link here:

“It is difficult to overstate the global importance of the opening of the Ford Island Control Tower at Pearl Harbor,” stated Elissa Lines, executive director of the Pearl Harbor Aviation Museum.

“Without a working elevator, visitors – especially veterans – have been unable to see the full view of Pearl Harbor and the historic battlefield that unfolds from this height. The elevator and accompanying interpretive exhibit will help visitors visualize the horror of Dec. 7, 1941, while experiencing the inspiring resilience that followed – the legacy of our Greatest Generation.” 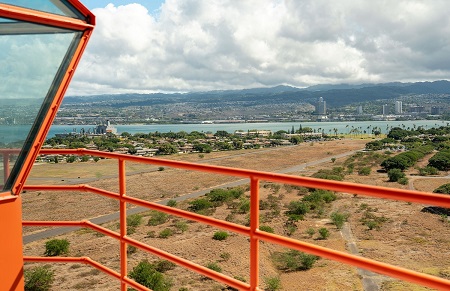 The virtual unveiling coincides with the 75th anniversary of the end of WWII, commonly known as V-J Day. V-J Day will be observed tomorrow from the deck of the USS Missouri, where the Instrument of Surrender was signed Sept. 2, 1945, in Tokyo Bay. Pearl Harbor commemoration events will feature a flyover of 16 WWII aircraft.

The Museum plans to livestream tomorrow’s events to the WWII veterans unable to attend due to safety restrictions and Hawaii quarantine requirements. Donations are being accepted to offset the cost of the high-quality livestream to every veteran wishing to participate in this experience. People willing to help can do so through the GoFundMe page set up by Pacific Historic Parks, or contribute to the Pearl Harbor Aviation Museum.

The Ford Island Control Tower is now home to a working elevator thanks to a donation from U-Haul CEO Joe Shoen, whose parents founded the DIY moving and self-storage operation in 1945. Many of the first U-Haul Team Members, neighborhood dealers and customers were veterans coming home from WWII, seeking to move their families to a better life.

U-Haul is marking its 75th anniversary by honoring the veterans who helped shape and grow the company into an industry leader. A series of press releases honoring U-Haul WWII veterans can be found in the History & Culture section of myuhaulstory.com. U-Haul Pacific Theater veterans have been memorialized in the tower lobby with an elegant display, available for public viewing.

“Our company is one of many that was born out of the prosperity that came from peace,” Shoen said. “On behalf of my family and all of us at U-Haul, I’m delighted to share our contribution to the renovation of Ford Island Control Tower at Pearl Harbor. This will enable the public, for the first time in history, to view America’s first aviation battlefield of WWII from above.” 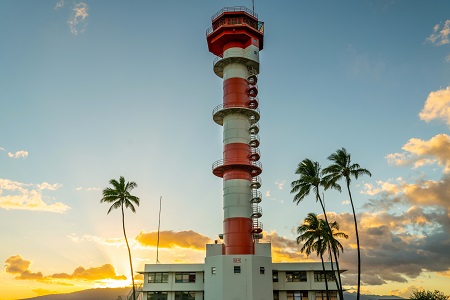 Pearl Harbor is the No. 1 tourist destination in Hawaii, attracting 2 million visitors each year.

By the end this year, visitors will have the opportunity (for a small upcharge to their ticket) to gain access to the Ford Island Control Tower elevator and observation deck. The Shoen family’s gift addresses the final step of the renovations, providing a 360-degree view of the naval station that was attacked on Dec. 7, 1941, launching America into WWII. Repairs on the tower began in 2010.

U-Haul, whose co-founder L.S. “Sam” Shoen was a WWII-era Navy veteran, has been recognized repeatedly as a top veteran employer and was recently named to the “Best for Vets: Employers 2020” list by The Military Times. U-Haul was also was the Presenting Veterans Sponsor at the Pearl Harbor Day 75th anniversary opening gala in 2016.

Among Pearl Harbor’s memorials is the famed USS Arizona, which holds special significance to Phoenix-headquartered U-Haul. More than 3,500 of the Company’s 30,000-plus Team Members reside in Arizona.

Pearl Harbor Aviation Museum is located on Historic Ford Island, where bombs first fell during the attack on Pearl Harbor on December 7, 1941. Walk the Pearl Harbor battlefield where the attack began, enter the bullet-scarred hangars, and see the Ford Island Control Tower and aircraft of the battle, including a Japanese Zero and B-17 Swamp Ghost. Hear the stories of World War II heroes and their response to the attack that changed our nation and world. Pearl Harbor Aviation Museum’s mission is to steward American’s first aviation battlefield of World War II. It is a 501(c)(3) nonprofit organization that depends on membership, volunteers and donations for support. To join, volunteer or support, visit www.PearlHarborAviationMuseum.org.

About U-Haul of Hawaii, Inc.

U-Haul of Hawaii, Inc. has been in operation since 1984, when its first Honolulu store opened. Today, U-Haul serves the Aloha State with company-owned facilities on Oahu, Maui and the Big Island, as well as more than 20 U-Haul neighborhood dealers. U-Haul offers moving solutions, including U-Box portable storage containers, for families relocating between the islands or the mainland. Reach U-Haul of Hawaii president Kaleo Alau at 808-836-0970.

Since 1945, U-Haul has been the No. 1 choice of do-it-yourself movers, with a network of 22,000 locations across all 50 states and 10 Canadian provinces. U-Haul Truck Share 24/7 offers secure access to U-Haul trucks every hour of every day through the customer dispatch option on their smartphones and our proprietary Live Verify technology. Our customers' patronage has enabled the U-Haul fleet to grow to approximately 176,000 trucks, 127,000 trailers and 41,000 towing devices. U-Haul offers nearly 774,000 rentable storage units and 66.7 million square feet of self-storage space at owned and managed facilities throughout North America. U-Haul is the largest installer of permanent trailer hitches in the automotive aftermarket industry, and is the largest retailer of propane in the U.S.