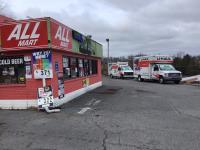 Customer Reviews for All Mart

Testimonials from recent customers of All Mart

This place never gave me paperwork or Came and did a walk around. I had to keep track of miliage and fuel as well. I would rather drive further to get better and more consistent service.

When I arrived, the cashier told me to do it online and then come back. Even though I found this odd. I did it. I reserve the truck, paid, and purchased insurance for the rental. I go back in to the cashier, she then calls someone on the phone who has to â€œfinalizeâ€ the process. The lady on the phone asks me how I would like to pay. I explained to her that I have already paid for the rental and the insurance. But, she says she has to do it, again. I explained I already had my confirmation/reservation receipt. Only then, did she quit asking for my debit/major credit card. I had to give her very personal information over the phone, which did not sit right with me, and made me very uncomfortable. BUT, this isn't the worst part!!! I did not receive my contact in my email until we had left the premises, several minutes later. Thank goodness, something told me to take pictures of the truck interior/exterior, but, especially, the gas and mileage!!! As soon as I open the contract, the gas reads that it is â€œ13/15â€ full (or a little over 3/4 tank), and that it is to be replaced to that level. The mileage reads 73,229.0 miles on the contract. NEITHER is true or accurate! There is no way this is â€œaccidentalâ€! The actual gas level was almost empty at 1/8 of a tank! And the mileage was 70 miles more than what their records indicated. I have pictures that are dated and time-stamped with the actual gas/mileage. I had to fill the truck up before I could use it. And fill it, again, to bring it back. Then, when I returned it, the mileage showed I was over, when, in actuality, I was under!!! I have used U-haul many times in the past. This is the only time I genuinely feel I was â€œripped offâ€ or â€œswindledâ€! I would NEVER recommend this place!!!! On top of the $200.00 I spent on the rental, the other expense was not fair and was very crooked! I only needed the truck 1 day and was told I couldn't rent for 1 day!!! This experience was dreadful!!!!

Woman did not explain the return process causing me to be charged an additional day for the rental that I did not have to the truck. The woman barely spoke to me and made me write the milage etc on a sticky note

I had to talk on the cell phone of the woman behind the counter to complete my pick up. She didn't seem to speak good English. And it was not comfortable to have to hold a strangers iPhone to my ear. There were no other UHauls at the location and other than the truck I rented being outside I had NO WAY to know that they were a UHaul location.

Best part about this location is that it's also a gas station. So you can fill up right there at the return. Also, plenty of space to park the track around back.

Entered the sketchy gas station establishment and could not understand a word from the gentleman behind the counter (Indian decent). He motioned to a cell phone that another customer was using talking to the Co-Owner(?) who speaks better English. I had to relay information in the store to the Co-Owner and was difficult with her accent to understand her. Next time I will go to a Larger Uhaul dealer as they have been much easier to deal with.

No dolly available, had to buy one. Someth iij ng happened and it took an hour of my time, but I brought the vehicle back after they closed and wasnt pestered about it

The lady at the desk wasn't aware how to do the uhaul but she was very friendly and helpful. I was glad that she gave me the phone to speak to the owner rather than do it herself since she didn't know how. I didn't get the dolly I ordered but the owner happily refunded me. Overall good experience and I would rent from there again.

The approval process of the entire thing was way too slow. I had set the pick up time for 8:30AM and was told when picked up that I had to wait until 9AM. I waited until 9AM and the rep said that I wasn't being approved because my photo was blurry, which it wasn't, but didn't have the option to reupload a new photo. After that was finally resolved and a different rep allowed me to upload a new photo, I went inside to get the actual key. Inside (which had a terrible urine-like odor) the cashier there seemed to be new and had no idea how the rental process worked, so she had to call her manager who was hard to get ahold of. Eventually, she was able to talk the cashier through the process. All in all, the 8:30AM pickup time turned into finally leaving the parking lot at after 10AM. The equipment itself was great and I had no issues there, it was simply everything else about this. I was very dissatisfied with my experience and I don't intend on renting from U-Haul in the future because of this.

The person at the desk didn't know how to check in a uhaul so she tried to reach another person. That person didn't answer so she just had me leave it. I didn't feel like I was getting it checked in so 2 hours later I drove back over to the location and the next person there didn't know anything about it. I still hadn't received a receipt at this point so he called the original lady and she said she was going to check it in soon. Everyone was really nice, but just strenuous.

When we select a place for drop-off - We do so because its the most convenient for us to do so. So DO NOT change drop-off location!!! Whats the point of doing online drop off if we still need to fill out information inside of location?

What a bad experience. Will be contacting UHaul directly and was overcharged.

Very friendly and easy to do business with. The 15 ft. truck had no gas cap. This should have been noted and repaired prior to rental. Equipment at this location was limited. I could get 12 blankets (max) and could not get a 4 wheel flat dolly here. I will use again.

Was pretty easy to rent the truck from this location , given it is a gas station neighborhood uhaul center only has 2 trucks at a time but was conveniently located close to my old home , the man there didn't speak very good English but managed to be very helpful and a nice guy , he was able to contact the owner I believe of the store and she assisted him . Returned the truck 24 hours later and same he needed to contact the owner and over the phone was pretty quick to rent and to return . I see one star reviews and don't clearly understand why these people were very polite . Would recommend location to other people .

Not a blessing to get a receipt printer was broken very bad experience.

The Express Online Check-In was pointless as I had to give all the information again to a person over the phone in the store. The one person at the store was not trained in truck rentals. Although I ordered, was charged, and planned on having furniture pads; found none in the truck. Staff at store said they â€œdidn't do thisâ€ at this location and refunded cost.

Initially wasn't sure this was even a drop off location. Small convenience store with only 1 u-haul trailer parked out back - like someone forgot it! Gentlemen did not speak English well enough to complete check in. I had to speak with his wife on the phone 2 different occasions. I called uhaul number listed online because I was not able to complete drop off online (or the app) due to issues with the photo portion (it simply would show a black screen and not allow me to upload a photo any other way). The gentleman wanted me to sign the receipt I showed him from my drop off and give him the keys saying â€œthey would email me a receiptâ€. I was not comfortable doing this. After multiple attempts to communicate that with him I eventually walked through the drop off on the phone with his wife. Relaying the mileage, gas was full, no damage to the truck, etc. I was finally on my way after a 45 minute ordeal!