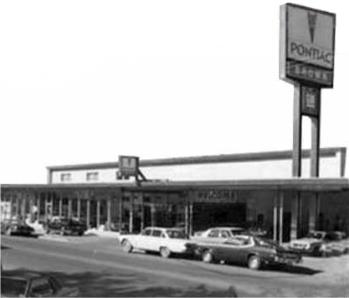 Introduced by General Motors in 1926, the Pontiac brand brought an affordable line of quiet and reliable automobiles to the market. The Brown Pontiac building in Amarillo, Texas opened for business in 1935 during the era of the Great Depression.  From 1942 to 1945 virtually all civilian car production was suspended, and the automotive industry transformed their factories to manufacture items for war-time efforts. At the time, General Motors had 400,000 employees at 112 plants, devoting 95 percent of company output to the war effort.  After World War II, Brown Pontiac served its community as an automobile dealership for another three decades.

After Brown Pontiac closed, U-Haul acquired the building in 1977 to provide do-it-yourself moving and storage services for the northern Amarillo community. Adaptive reuse building conversions allow U-Haul to promote infill development to meet citizens’ needs while preserving the natural resources and land normally required for new construction. Adaptive reuse also allows resources to be focused on integrating environmentally thoughtful features into the existing building rather than creating waste in the form of demolition and using valuable resources for new construction.

Energy-efficiency and waste-reduction programs at this facility provide the following estimated benefits each year for the Amarillo community: