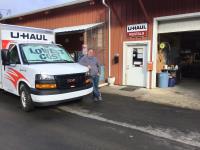 Trailer Rental & Towing in Waldport, OR at Grandpas Feed and Pet Supply

Moving to or from Waldport, OR? U-Haul cargo and enclosed trailers are intelligently designed to protect and secure your precious belongings, while our open utility trailers are perfect for hauling building supplies, landscaping materials or bulky items. U-Haul car trailers have EZ load ramps for effortless loading of vehicles while our motorcycle trailers are lightweight and easy to tow. Get FREE trailer rental rate quotes in Waldport, OR 97394 today.

Cargo trailers in Waldport, OR are lightweight, aerodynamic, and engineered for better fuel economy which makes it easy to tow behind any vehicle. Millions of families use our enclosed cargo trailers to move every year. U-Haul has a large selection of enclosed trailers to rent in-town or one way, review our cargo trailer sizes and reserve a trailer rental online at Grandpas Feed and Pet Supply!

Moving cross-country with your vehicle on a car trailer is a smart way to save gas and eliminate miles of wear and tear on your vehicle. Our Tow Dolly is a low-cost option for towing front wheel drive vehicles, while auto transports are ideal for long distance moves. Both car haulers fit most sized vehicles in Waldport, OR and are also an economical alternative to calling a tow truck in the case of a break-down. Whether towing behind a U-Haul moving van or your own personal vehicle, you can rent a car hauler for both in-town and one way moves.

They were quick getting me set up and brought the truck closer to my car to switch things over. I've been to Grandpas Feed many times for truck rental & boxes. Very good customer service.

Truck was dirty inside and filthy outside, windshield wiper on passenger side was falling apart and they didn't notice/replace it. One of the tires was in bad shape and blew on the first day. Since they knew we were traveling across the country, I was surprised that they hadn't done any safety or cleaning check on the vehicle.

Sometimes the instore process working up the rental contract takes more time than seems necessary. The outside hookup goes swiftly. Overall I am pleased with this location and will use it often.

Nice people in a beautiful setting.

Service is good as it is.....no need to try to improve anything.

Matt was great and helpful. He even replaced a bad tail light on the trailer that a previous location had just put a sticker on. The staff here at Grandpa's Feed and Pet Supply are all friendly and professional.

The best most friendliest little UHAUL's ever!!!!!

My experience with U-Haul was horrible. The equipment was excellent. Yet I picked up my equipment on two days and you charged me full price each time double billing and your agent SPECIFICALLY TOLD ME MY CARD WOULD NOT BE CHARGED, that I would pay when returning it. This overdrew my checking account and I've been receiving overdraft fees of $36.00 every day now and U-Haul has still not refunded my money and they could care less about my overdraft fees. The local regional manager has been great, always kind, always considerate, always helpful, it's corporate policy that is the issue. How would you feel if a company was deliberately stealing money from your bank account and causing a build up of overdraft fees. This is not how I learn business and customer service works. You get a huge 5+ star rating for some of your people and your equipment, it was great and a bummer -1,000,000 star rating for customer service and simple human decency.

Please stop displaying the DO NOT RENT code for me everytime I attempt a rental recently. I am a 20 plus year paying customer. I have spent thousands of dollars with your company and this is getting old. This a a time wasting process for the Uhaul franchisee spending ridiculous amounts of time on the phone trying to approve my rental not to mention my time as a Uhaul customer.

These people are amazing. If you are returning from a long one way or local they are amazing

Nice guy. Check in was simple and quick. Very happy...

Staff was awesome and dropping off equipment was quick and easy.

Explain the after hours return activities required at time of receiving the truck.

I liked being helped by Matt as he was very competent and friendly. Good job!

This over-all experience was not stellar. I made contact 03/29 with your U-haul after calling Corvallis OR, but was dispatched to HOTLINE. This person took my information, reserved a trailer, told me it was $14.95 in-town, and scheduled to be picked up 03/31 10A in Newport OR. On the way home from Corvallis I was contacted by a woman (Jessica) from Eugene OR (regional area office) and she told me that she was glad to catch me, because the Newport OR U-haul facility was closed due to COVID-19. i was already halfway home. She told me that she would just switch the reservation to Walport OR facility, because they were open due to being essential business for pet/livestock feed. I was at facility, while being loaded up, i notice that there were (2) RT model 5x9 trailers. I was given a standard 5x9, which does not have the notch in the front for longer motorcycles. I was told by Jessica at Eugene OR, that there were no RT models available. The gentleman that was hooking me up, told me that he would switch the trailer for RT 5622. I had already made arrangement to move a larger/longer muscle bike by paying a man with a cargo trailer to move my bike since I was told that one of these 5x9 styles was not available. Another issue i have was upon returning the trailer on 04/01, the person working the U-haul seem to be agitated and inconvenienced, when he asked me if there was anything else he could do. I told him, that I still needed to pay, he told me it was automatically done. i told him that I had made it clear that I would be paying the rental fee with cash. He made it clear that it was going to take him time to fix this and that it was pretty much a hassle by his tone. I conveyed this was not my mistake, regardless of who on U-haul end or their employee did not do on 03/31, upon my picking trailer up. I gave him the cash, thinking he was correcting the from of payment which had already been applied to teh rental fee on my credit card, and was waiting for him to come back from a distant printer. When he came back I had asked him for a receipt, which would show the credit of $24.95 off my card, and the payment received of $24.95 cash, along with a receipt showing my return. I gathered he was not happy about doing the right thing and being thorough. I must say that walking into an actual U-haul facility is a much better experience. Next time I do U-haul it will be at an operation such as Corvallis OR. People are much more knowledgeable, courteous, professional, and thorough. Thank you for your consideration.

Trailer tongue weight (unloaded) was too heavy for me to unhitch it by myself. Had to call a friend for help. Previous trailers of this size that I rented had jacks to help. I believe this size/weight trailer (6 x 12) should be equipped with a jack as standard.