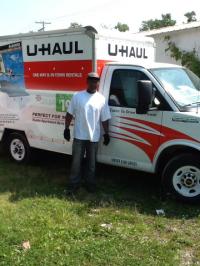 Moving Truck Rental in Harrisburg, IL at Triple A Appliance

Moving to or from Harrisburg, IL 62946? Get FREE truck rental rate quotes at Triple A Appliance. rental trucks are specifically engineered from the ground up to assist moving families, not freight. Our moving trucks have more safety features than other moving trucks in the industry including gentle ride suspension and high visibility mirrors to assist the driver. Whether you are moving a smaller apartment or a large four-bedroom house, truck rentals in Harrisburg, IL will provide you with the moving truck rental you need to get from point A to point B. Find the perfect size moving truck to assist with your move, is home of the $19.95 rental truck!

Simply click on each moving truck shown above to view individual truck specs including: safety features, towing capacity, fuel economy and of course, the available space-per-truck size. Each rental truck is individually priced to help save you money, time and energy on your move to or from Harrisburg, IL.

U-Haul cargo van rentals and pickup trucks in Harrisburg, IL are perfect for home improvement projects, deliveries and other small loads. Rent cargo vans or pickups to save money on local moving or deliveries. Cargo van and pickup truck rentals are popular with local business, college students and smaller housing moves in Harrisburg, IL 62946. Our moving van rentals include air conditioning, rub rails to protect your belongings and come equipped with a hitch to tow a trailer rental. is the home of the $19.95 cargo van rental in Harrisburg, IL, reserve a van for your moving needs from Triple A Appliance!

Staff/Owner were unprofessional but friendly. Equipment was well maintained and clean.

Absolute worst experience I have ever had with Uhaul! My reservation was for 9am I had hired movers! I have the last who made my reservation my card number the day before when I got there at 8:50 the man was just clicking random things and wasn't entering information correctly giving him the red stripe across the top telling him what to fix it about 15 minutes of him doing that I started typing in my OWN information for him and got to the last page where It asked for a card again although that should have been on file so when I give him the card number it went to a page that mentioned a $100 deposit and he did something and next thing I know the card is declined he tried again declined again then he proceeds to tell me I don't have any money in my account I was there for 45 minutes at this point so it's Saturday and he's saying I have to now pay cash but instead of it being $91 it's $191 because of the deposit. I end up using my sisters card and he gave me a receipt for $91 when I returned the truck they charged my card for $91 so there was absolutely no reason why my card would have declined his transaction but accepted the one later from the same company same amount! That was completely unacceptable I had movers I was paying by the hour and because of this I had to pay for a extra hour to get the truck! Had I known I would have got it from Marion and just paid the extra money for the mileage

Be more professional on the phone and then change your attitude when I showed up in person!

We were held up time wise as the gentleman at the Land Street Location was not on time for work. We had to wait. The gentleman then said we owed $100 now and he did not read the contract that had already been paid for at a different location. We received a vehicle that the sun visor fell off in his parking lot before we could leave. Then returning the vehicle with no damage and with the correct amount of fuel and clean, refused to give us back the $61.49. We had to drive across town to a different facility 5 times and still never received all of the money owed to us plus we had to spend time and money because your associate refused to do his Job. We will not ever use his facility again. If you only have him we will use some other company to do business with. We appreciate the across town associate Stephanie at the Horse Shack she is top notch, and she showed her concern and care for us. Good day to you. I feel we should be compensated for our troubles with your man who had a lack and care for us as customers.

Doing the self check out was a nightmare. I wanted to pick it up at 5pm but the app couldn't find my reservation. I spent over 3 hours total on the phone, mostly on hold and didn't get the truck until 9pm. His caused us to have to work late into the night. The whole system is not very reliable and I was not happy with how it worked, at no fault of the rental or drop off locations. Was not worth the amount spent for so much hassle.

More units to choose from I had ordered a small trailer and it was there, but I needed a bigger trailer and there was not one there.

The man in Harrisburg was wonderful! The place was a little run down. The truck was dirty and was 3 quarts low of engine oil that I added myself when I got home. The truck ran good though.

Don't make someone drive 43 miles to pick up their truck when they have a 2200 mile move. I honestly hate uhaul for that. If penske had an autotransport big enough for my suv I would never have booked with uhaul

The location was small.

Very nice to deal with. Thanks!

Was very impressed about the courtesy and the helpfulness of Triple A Appliance. They went out of their way to accommodate me.

The facility was really run down and not inviting. The man there was helpful and friendly, however.

I thought the price of $380 more or less was quite expensive for a 5'X8' trailer.

There was no representative there to be able pick up our u-haul. From the time we arrived to the time we left, it took just under two hours. I found this to be a bit troublesome considering I had already pre-registered and reserved the uhaul online.

It was the only place in town I could drop off at, and it was after business hours, so no one was there at the time, but it looks like a "hole in the wall" of a place from the outside.

The guy was very rude and left earlier than he was suppose to so he was not there when we got there. I called to tell him I'd be a couple minutes late since he closes at 4:00 unlike I was told. I was told the U hauls all close at 7:00. He didn't tell me where to park the truck just to put the key in the drop box. I saw a place to put the paperwork so I put it in there showing that when I started out the tank was below were it was suppose to be. I was told to put the gas where it was marked on the paperwork. The Huck's gas attendant behind the drop off place helped me pump it so I would be correct in the amount to replace the gas. The guy at the Harrisburg claims it was way too low and was going to charge me $30, even after me explaining what the attendant at the Indiana U haul told me about it being low. He continued to argue with me so I hung up on him since he was being so unreasonable and unprofessional.

Took a while to get checked out but the guys were very friendly and helpful.

No one available check equipment back in for two days

Absolutely no brakes on u-haul. Caused near accidents when stopping.

Vendor would not arrive early at all for pick up. Requested this the previous day but he was still running barely on time and then took 10 minutes to wait on us.

the truck we wanted was not the one we got. we ordered the 1999 per day truck and got the 29 99 per day truck. We ordered the truck at another location in Harrisburg Illinois and were told that the place we ordered it with get the credit for the rental even though they did not deliver us the truck. That doesn't seem right for the people at the location where we pick the truck up. They had to drive 80 miles round trip to get the truck for us and then they said they wouldn't get credit for it. we also should not have been charged $10 more for a larger truck then what we wanted. The people that knows locations were nice to us. It sounds like a corporate problem.

The personnel at the location for pick up and drop off were confused. No receipt was given and they were unable to tell us how much we were being charged. My wife had to look at our online bank statement for the information. I will not be using U Haul again. I have used other truck rental services before. I will take my business back to them.