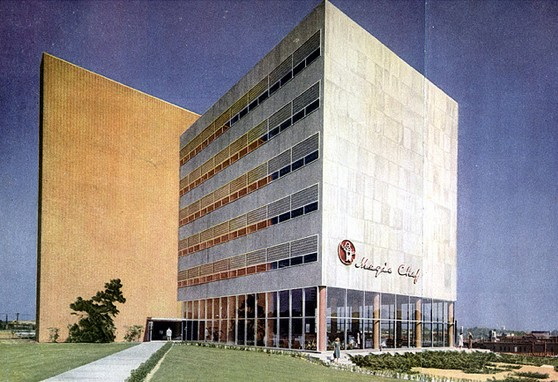 In the late 1940s, when U-Haul was still in its infancy, the American Stove Company was in its prime, churning out Magic Chef gas ranges that ended up in homes around the world. Their former headquarters were in St. Louis, in the facility that’s now home to U-Haul Moving and Storage at Kingshighway Blvd.

The Magic Chef building was recognized for the architect’s early adherence to the principles of modernism. It was built in 1947 by a St. Louis architect named Harris Armstrong. Customers who walk into U-Haul Moving & Storage at Kingshighway can’t help but turn their attention immediately to the ceiling because the ceiling also is a work of art, the creation of Isamu Noguchi. Noguchi sculpted the project in the 1940s. In 2016, the ceiling was repaired and painted according to its original look and colors. The ceiling sculpture is the only remaining structure depicting Noguchi’s “lunarlandscapes.” The building also contains plenty of the original signage to direct visitors to the lobby and former Magic Chef showroom.

Cooks everywhere—in restaurants and residential kitchens—loved their Magic Chef, and the Magic Chef name became so popular that, in 1951, American Stove Company changed its name to Magic Chef, Inc. The next few decades saw ownership of the company change several times and the company vacated the Kingshighway Blvd. location.

After Magic Chef left the building, the building was used as the St. Louis Labor Health Institute for several years. When the health institute vacated the building, it sat vacant for nearly 10 years until U-Haul purchased the property in 1977.

U-Haul immediately got to work transforming the Magic Chef building into a full-service moving and self-storage facility. Today, U-Haul Moving and Storage at Kingshighway Blvd. offers U-Haul truck and trailer rentals, box sales, hitch installations, propane, climate-controlled self-storage rooms and U-Box portable storage pods. The facility certainly has come a long way from making Magic Chef ranges in the 1940s and 50s, but thanks to U-Haul going to great lengths to retain many of its key elements, it remains one of the more recognizable buildings in St. Louis.

Energy-efficiency and waste-reduction programs at this facility provide the following estimated benefits each year for this Saint Louis community: