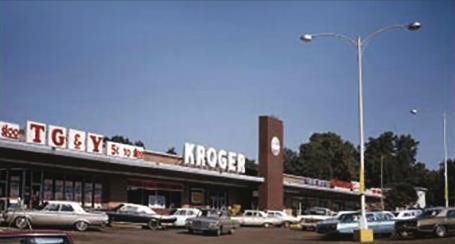 The Kroger Company was founded in 1883 by Barney Kroger. Mr. Kroger invested his entire life savings, a total of $372, into the grocery enterprise and vivaciously followed his dreams. The original store was located at 66 Pearl Street in downtown Cincinnati. During this time, markets were smaller and sold mostly produce. It was common for grocery markets to purchase bread from local nearby bakeries, but Mr. Kroger was determined to cut costs and provide his patrons with freshly made bread right from his store. He is credited with being the first to open a bakery right inside the grocery market.The idea was a hit and thanks to this revolutionary thought, it is still commonplace to find a bakery within a larger grocery market. Mr. Kroger was also the first to sell meat and groceries all in one building under one market.

Mr. Krogers drive to provide fresh made products at the most value to his customers, did not simply stop at bread and meats. Kroger purposefully bought extra produce like cabbage, which he brought home to his mother who in turned used a family recipe to create sauerkraut. Kroger then sold his family's Saurkraut directly in the store. These early self branded products have now transformed into one of the largest food manufacturing businesses in America. Kroger currently operates 40 food processing facilities that make thousands of products ranging from bread, cookies, soda pop, ice cream and peanut butter. Nearly half of all products offered in Kroger stores today are made in their own manufacturing plants. These Kroger branded products continue to provide an exceptional value for customers and also drive an impressive 26% of sales profits.

Modern Kroger stores have grown exponentially in size and can now accomodate up to 50,000 items ranging from grocery staples, organic vegetables, natural foods, hot meals, bakery products and floral arrangements. Stores still include interal bakeries, meat counters, in-store pharmacies and some locations have even installed fuel centers in the parking lots. In 1999 the Kroger Co. completed a merger with Fred Meyer, Inc. in a $13 billion deal allowing it create even more impressive economies of scale. Kroger is truly a pioneering grocery market in many ways.

The former Kroger building in Shreveport was built in 1956 and U-Haul was fortunate enough to be able to acquire the property in 1977. This location now proudly offers truck and trailer sharing, safe and secure self- storage and retails sustainable moving products.

Energy-efficiency and waste-reduction programs at this facility provide the following estimated benefits each year for this Shreveport community: