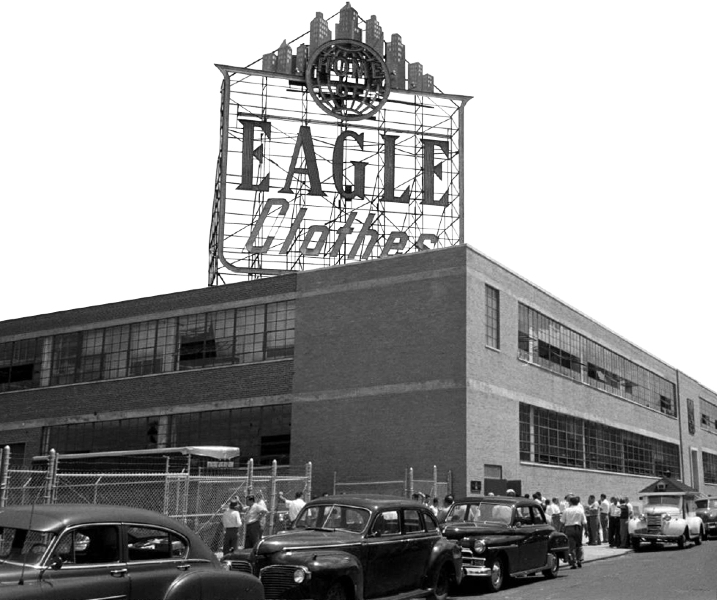 The 1950s and 60s were known for well-dressed men in business suits—a trend glorified in today's popular television show "Mad Men." Those lucky enough to live in Brooklyn, New York, during this time would have been near the brand-new Eagle Clothes factory which opened in June 1951. According to an article in The New York Times, the factory housed all of the clothing company's operations and was "scientifically designed and built to meet the needs of employees." It truly was the most modern and efficient factory in the men's clothing industry at that time. And with Rock Hudson and Gregory Peck endorsing these dapper threads, men would have jumped at the chance to purchase a suit made by Eagle Clothes. After soaring to the height of the "working man's suit" industry, Eagle Clothes plummeted during the 1970s before declaring bankruptcy and going out of business. In 1977, U-Haul purchased this building and converted it to a moving and self-storage center. The building was re-imaged to match the design of many U-Haul Centers throughout the nation, and the interior was repurposed to house a showroom, self-storage units and a hitch bay.

Those who live in the Park Slope and Gowanus boroughs of Brooklyn are probably very familiar with the original Eagle Clothes sign on top of the building. U-Haul is a leader in the field of reuse development and strives to maintain historical and cultural landmarks in all of our revitalization projects. The Eagle Clothes sign is no exception. We are working diligently to maintain the original neon sign that provided so many memories to those who originally lived in or passed through community during that time. Though this old building has outlived its original purpose as a clothing factory, it lives on through our moving and self-storage customers, and the gorgeous sign atop the building is a constant reminder of our treasured past.

Energy-efficiency and waste-reduction programs at this facility provide the following estimated benefits each year for this Brooklyn community: