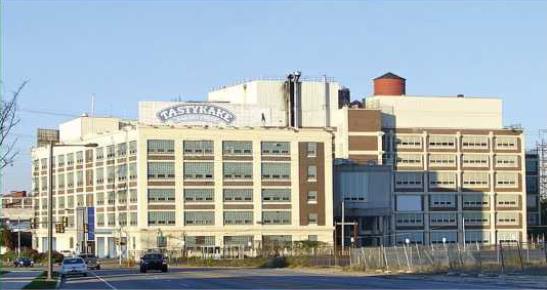 In November of 1913, Phillip J. Baur and Herbert T. Morris founded the Tasty Baking Company. The brand distirbuted their goods with the catchy slogan, “The cake that made mother stop baking!”. "Tastykake" was the snack line first introduced by the Tasty Baking Company in 1914, a year after the company was established. The Tastykake line offered prepackaged desserts such as Cupcakes, Krimpets, Kandy Kakes, Juniors, Cookie Bars, Dreamies, Pies, Brownies, Donuts and Danishes. The Kandy Kake became their best selling baked good and at the height of production, half a million Kandy Kakes were baked each day.

Originally only distributed in the Philadelphia area, Tastykake eventually expanded sales across the east coast to Florida. Distribution was executed solely by horse drawn carriage until 1941 and therefore the snacks were primarily distributed within city boundaries. Though the company was headquartered in the Allegheny West neighborhood of Pittsburgh for many years, they are currently located at the Philadelphia Navy Yard.

The Tasty Baking Company building was built in 1922 and U-Haul purchased the building in 2015. Upon purchase, the building had been vacant for 5 years and fallen into disrepair. Adaptive reuse building conversions allow U-Haul to promote infill development to meet citizens’ needs while preserving the natural resources and land normally required for new construction. Adaptive reuse also allows resources to be focused on integrating environmentally thoughtful features into the existing building rather than creating waste in the form of demolition and using valuable resources for new construction.

Energy-efficiency and waste-reduction programs at this facility provide the following estimated benefits each year for the Philadelphia community: