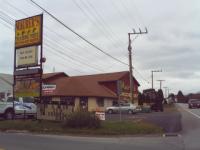 Moving to or from Franklin, PA 16323? Get FREE truck rental rate quotes at Maurers Trading Post. rental trucks are specifically engineered from the ground up to assist moving families, not freight. Our moving trucks have more safety features than other moving trucks in the industry including gentle ride suspension and high visibility mirrors to assist the driver. Whether you are moving a smaller apartment or a large four-bedroom house, truck rentals in Franklin, PA will provide you with the moving truck rental you need to get from point A to point B. Find the perfect size moving truck to assist with your move, is home of the $19.95 rental truck!

Simply click on each moving truck shown above to view individual truck specs including: safety features, towing capacity, fuel economy and of course, the available space-per-truck size. Each rental truck is individually priced to help save you money, time and energy on your move to or from Franklin, PA.

U-Haul cargo van rentals and pickup trucks in Franklin, PA are perfect for home improvement projects, deliveries and other small loads. Rent cargo vans or pickups to save money on local moving or deliveries. Cargo van and pickup truck rentals are popular with local business, college students and smaller housing moves in Franklin, PA 16323. Our moving van rentals include air conditioning, rub rails to protect your belongings and come equipped with a hitch to tow a trailer rental. is the home of the $19.95 cargo van rental in Franklin, PA, reserve a van for your moving needs from Maurers Trading Post!

The door on they trailer needs to be lubricated and serviced. There is a great problem with lifting the trailer tongue onto a vehicle. It takes two adults with great strength to lift the tongue. Need to provide something to assist in lifting to attach to the vehicle.

The truck had snow and ice on it. Took over 30 mins to warm it up to get snow off.

Loved that you're open on Sunday. Wish we would have checked to see that the dolly was in the back which we requested (it wasn't), but it was promptly taken off of the bill.

We were charged for 2 days and we returned equipment within 9 hrs of rental. Agent said to drop contract and key in drop box. Said nothing about after hours checkin on phone. Now on hold for 45 minutes with 1800 # to dispute. She said it has to be reviewed. I'm not happy with u-haul at all, should be u-suk

The people were friendly and helpful. I would go there again.

Trailer tongue super heavy. Could not have hooked up if I had not brought someone with me. There should be a jack on this trailer!!!

Wasn't told my original pickup location did not have the trailer I reserved and had to drive another 45 minutes for it. Finally got checked in, Was told the trailers outside and that I could just hook it up myself. did not get any paperwork for the trailer due to their printer being out of ink which resulted in me not being able to drop off the trailer after hours.

Well for 1,I'm being told by uhaul that I'm being charged for gas when I had stopped and put gas in the truck before bringing it back,I took a picture of the dash board along with my friend and his step daughter and the gas gadge reads a little more then a quarter tank in it and it was at a quarter tank even when I picked it up so there was actually more gas in there then when I drove off in it and Ice 3 dated pictures that are time stamped along with a call I made to uhaul when I got home to tell them I dropped it off which will put me at home about 30 minutes after I took the pictures of the gas level.So something fishy is going on there with the gas in the truck after I dropped it off,so either the person is lying about putting gas in to get an extra 42 dollars on top of what I should of had comen back from returning it before midnight,someone is lying??either Maures or their employee???But I have pictures for proof..

Needed air in tire upon pick up. Had to stop to fill with air before loading it.

Have a sign that points to key drop off. We spent about 20 to 30 minutes looking for it

The person who I returned truck to was rude and I felt he didn't want to deal with me.

I WAS TOLD THE MOST I WOULD BE CHARGED, IF I DROVE LESS THAN THE 80 MILES WOULD BE $132AND I WAS CHARGED $156 FOR SOME REASON. YOUR USE OF AMBIGUOUS RECEIPTS LETS YOU CHARGE MORE THAN THE PROMISED AMOUNT

Trailor hitch was on the ground so we had trouble picking up the trailor itself. Minimal help was given. Finally after an hour plus we did receive assistance and got hooked up. Trailor was dirty inside and not had been swept out. Returned the same day and notified staff when I brought it back. Uhaul calls them the next day to verify of it being returned and they said it hadn't been! It was dropped off in the exact same spot it was picked up. Very unorganized operation going on there. Won't rent from them again.

the staff was very good and easy to work with

The first truck had a scrape down the side and smelled like cigarettes and had a low tire. I was told to fill out a claim form and wait for roadside assistance when I called the 800 number. REALLY!! I didn't even move the truck. It took me 45 minutes to rent a u-haul. Not overly impressed. Probably won't rent one again

Knowing that many people use the uhauls an the uhauls go through some very ruff people and hauls the drive was ruff. It seemed like an older truck but didn't have many miles on it but you would think it was built in the 1970s. I can't complain about the service I had trouble with my packing crew being able to help me and had the truck a few days longer than I expected.

The people at mauers were good and the equipment was good and fairly priced. My only complaint is the interface used to gather information and actually rent the item. I could tell that it was terribly cumbersome for the employee to use and it took a really long time to work through. If there was some way to simplify the check out process it would be much better. This is the third time in recent times that I have encountered the same issue (all different locations) and the employees had a really hard time using the required interface.

Bolts were working loose on the front panel of the trailer. I made a video of it. Someone had used packing tape inside to keep water out. By the time I got to my daughters place to load the trailer the panel had slid out of place much more. I took more photos. I called the office in Lake Placid because I dropped the trailer off when they were closed. He said he had noticed the problem already but thanked me for calling. He also said he would not rent the trailer out in that condition.

I should have went to the local State Police station and had them DOT the truck... I'm pretty sure it would have been put OUT OF SERVICE. Broken mirror... the frontend was so loose, it was difficult to keep the truck on the road... doing what I do for a living, have a real good grip on the laws regarding the safe operation and maintenance of said truck.

The truck was the worst one i have ever driven. Everything rattled and seems like it shpuld be retired.

Maurer's was awesome to deal with on this rental! Would recommend to anyone.

Was not the cleanest, but not too terrible. Bad part was Mauers Trading post stated that their system was down, so everything was done with e cell phone by them, so I photographed the mileage in and out for the rental. Once I returned, they stated the incorrect mileage and overcharged for 78.5 miles of travel. I have been trying to get reimbursed for 2 weeks now, and getingt the runaround. Someone at Mauers Trading Post did not do their job of correctly checking and recording mileage, and now I spend my time trying to correct for their issue. Uhaul online chat is also very slow, and vague answers. I provided all evidence showing the correct mileage, and was denied, so I have to spend more time trying to resubmit because Uhaul didn't fully review the information. RENTER'S BEWARE of Mauers Trading Post Uhaul service, you may be getting way more than you asked for.