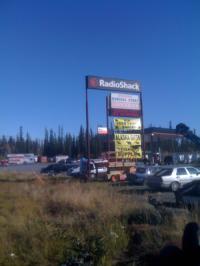 Moving to or from Glennallen, AK 99588? Get FREE truck rental rate quotes at Sparks General Store. rental trucks are specifically engineered from the ground up to assist moving families, not freight. Our moving trucks have more safety features than other moving trucks in the industry including gentle ride suspension and high visibility mirrors to assist the driver. Whether you are moving a smaller apartment or a large four-bedroom house, truck rentals in Glennallen, AK will provide you with the moving truck rental you need to get from point A to point B. Find the perfect size moving truck to assist with your move, is home of the $19.95 rental truck!

Simply click on each moving truck shown above to view individual truck specs including: safety features, towing capacity, fuel economy and of course, the available space-per-truck size. Each rental truck is individually priced to help save you money, time and energy on your move to or from Glennallen, AK.

U-Haul cargo van rentals and pickup trucks in Glennallen, AK are perfect for home improvement projects, deliveries and other small loads. Rent cargo vans or pickups to save money on local moving or deliveries. Cargo van and pickup truck rentals are popular with local business, college students and smaller housing moves in Glennallen, AK 99588. Our moving van rentals include air conditioning, rub rails to protect your belongings and come equipped with a hitch to tow a trailer rental. is the home of the $19.95 cargo van rental in Glennallen, AK, reserve a van for your moving needs from Sparks General Store!

I requested snow tires for the trailer because we would hit snow in the mountains but was told U Haul did not provide them.It was suggested we might stop before the mountains to see if another U Haul dealer would swap our 12 foot trailer with one that had snow tires. She told me would probably have to repack our things into the new trailer. Really? All we needed was a pair of snow tires!! It is winter in NH - have snow tires available !!

By far the most friendly and accommodating uhaul location I've ever been to.

Hard working and very busy, but she took time to help. She did a great job.

It would be very helpful to have a Valdez location. The cost of getting a truck to move with was to high because I had to pick the truck up outside of valdez

Sharie in GlennAllen was incredible. So was Anchorage. Be safe and Thank you we will be renting again.

The lady was cranky and made several remarks indicating that she was 'very busy' and didn't like the interruption. The next day a young man was there who was very helpful and POLITE, his name was Brian. He helped me hook up the car trailer, checked the lights and had me on my way in no time.

Notified the dealer 2 weeks in advance and did paperwork. The day I went to pickup the truck the truck was not there, The store manager said she was busy and didn't have any help to go get the truck and asked my wife and I to go get the truck and bring it back to the store for her, which we did because we needed to start packing. When I got to Glennallen fuel where the truck was at it would not start. I looked the truck over and observed damages to the front drivers side bumper area. I asked the mechanic there if he could fix it and he could not because the headlight brackets were broke and would require a new assembly. The mechanic pointed out the truck had "x" stickers on it showing it had already been prior damage. I returned the truck to Sparks store and informed the manager the truck had damages and she said it did not because it was a new truck. I took her out to the truck and showed her the "x" stickers and she said since it already had the stickers it was already in the system. I never received a diagram to mark prior damages and she only asked that I pay and sign the contract. Half way through the trip we kept smelling gasoline. I fueled up somewhere in Canada and parked on a hill. I observed fuel running out the back of the fuel tank. I crawled under the truck and found a fuel cap was missing, so who knows how much fuel I lost up to that point. I turned the truck in at a Longmont Co location and pointed out the prior damages and fuel cap missing. The manager said the truck should not have left Alaska in the condition it was in. The manager, Alfonso, said other than the prior damage the truck was good to go and I left. I received a call from Uhaul insurance later but was not able to call them back. I called them on Jan 16, 2017 and I was asked how I was going to pay for the damages that already have an "X" on them. I again had to tell the story of this truck and the insurance person said I needed to contact the dealers and to call her back with the info. Contacted Uhaul Cooperate to file a complaint. It seems no one in Uhaul wants to take responsibility for the prior damages and wants the customer that pointed it out to pay for it. It also seems Uhaul is taking a back seat to this complaint because the customer, me, is the one that is being told to be the middle man and to make all the calls.

Maintenance on the vehicle

Training for new hiires may be required on returns.

Cruise control would be nice when driving over 2000 miles

We had to extend the rental numerous times and the staff at the store was more than helpful in letting us do this.

For starters, having my reservation in the computer rather than me having to stand there while the clerk reenters all the information I already gave online. For two, having someone at least go over the trailer and do a walk around would be nice, since Uhaul makes such a big deal about liability. I had to drive four hours round trip to pick up and it would have been nice to have a bit of service.

Easy to turn in truck.

Have the On-Line Web reservation forward the reservation to the local vendor. No one told Sparks General Store about the reservation I made in JANUARY for a trailer I MAY. Preposterous, especially since I got a confirmation call the day before the pick up. Delayed my departure substantially.

The inside was not completely clean when we picked it up. The fuel consumption was more than we expected and the power of the truck was somewhat sluggish. We didn't even have a full load. The change oil light was coming on and so we noted that and checked it at each service station on the way. Never was it low.I don't know how often the Uhaul folks change it but for our trip it should not have needed an oil change 3/4 of the way to our destination...... Thank you.

The employee had to have previous employee do my rental because he didn't know how.

This location was average, however I had a lot of difficulty with the reservations from the 1-800 number. My original rental was not returned and then the charges were input wrong on the rental that I ended up picking up on my way. The only reason I was able to get that rental was because I happened to call from the road, having not heard back the previous day as I was supposed to have. I was making a 400 miles trip and was hoping to rent a trailer at the end of it since my trailer at the beginning was rented. I called at the city halfway to my destination and discovered that the only trailer available to me happened to be in that particular city. Had I not called I would have been left in a very difficult situation with no assistance from this company. As it was I expected to have some sort of compensation for the mistakes and difficulty I was put through and I did not even receive an apology. In the future I will be looking into other rentals or arrangements rather than risk being left in a lurch unapologetically.