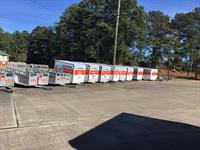 Moving to or from Natchitoches, LA 71457? Get FREE truck rental rate quotes at Keep Safe Storage. rental trucks are specifically engineered from the ground up to assist moving families, not freight. Our moving trucks have more safety features than other moving trucks in the industry including gentle ride suspension and high visibility mirrors to assist the driver. Whether you are moving a smaller apartment or a large four-bedroom house, truck rentals in Natchitoches, LA will provide you with the moving truck rental you need to get from point A to point B. Find the perfect size moving truck to assist with your move, is home of the $19.95 rental truck!

Simply click on each moving truck shown above to view individual truck specs including: safety features, towing capacity, fuel economy and of course, the available space-per-truck size. Each rental truck is individually priced to help save you money, time and energy on your move to or from Natchitoches, LA.

U-Haul cargo van rentals and pickup trucks in Natchitoches, LA are perfect for home improvement projects, deliveries and other small loads. Rent cargo vans or pickups to save money on local moving or deliveries. Cargo van and pickup truck rentals are popular with local business, college students and smaller housing moves in Natchitoches, LA 71457. Our moving van rentals include air conditioning, rub rails to protect your belongings and come equipped with a hitch to tow a trailer rental. is the home of the $19.95 cargo van rental in Natchitoches, LA, reserve a van for your moving needs from Keep Safe Storage!

Very easy process to get the right U-Haul and very friendly and helpful employees!

Had to wait over an hour because no one was there. Charged for extra mileage but not refunded turning in the truck a day early and could had returned it 2 days early but they were not open.

Keep the good work up

Only moved literally 10 mins up the road from old house and it cost 105 dollars plus another 30 miles charged at 13.00. Yall should have a local price as well as an in town price

Clean inside and outside of windshield or provide supplies for customer to do so. Tommie was amazingly helpful. She deserves a raise.

Thank you oh so muchthe service was very very good.

That the phone line can work even on weekends. I was trying to reach This office for the past two day and nothing, or nobody was able to help me.

Nothing comes to mind.

Our reserved 6x12 ft trailer, reserved at Keep Safe Storage 5841 Hwy 1 Bypass Natchitoches, LA 71457 in Natchitoches, Louisiana months in advance to be picked up at 8:00 AM on a Saturday for a 900 mile 4-day cross country trip to take our grandson to start grad school, was apparently given to another user. At nearly 10:00 AM, two hours already behind a tightly planned schedule, the one we were assigned after the correct number was not there, was in poor condition. The brake lights and turn signals did not work. The obnoxious lady, the local general manager, told me "Take it or Leave it", and that we "MIGHT" be able to haul it sixty (60) miles away to Shreveport, to see if they had another one. I had also asked her to please check the tire pressure as they seemed low - she said "We don't check tire pressure - we just kick the tires"! After phoning the national corporate phone number, it turned out that there was another 6x12 at another site right there in the same town and operated by the same franchise. The young man there, a local college student who actually reports to the difficult general manager, was extremely helpful and accomplished our exchange to a unit which was completely operable. It is unfortunate that we lost ore than two and a half hours, had to deal with defective equipment, and had to deal with an obnoxious, uncaring, general manager, especially since, had we not gone back through corporate, we would have had to load into an unsafe unit, drive more than an hour via interstate highway and city traffic, and hope that other locations were still open after hours to swap out the trailer and a full load. The balance of the trip was uneventful, and the people where we turned in the rental at Macomb, Illinois were a pleasure to deal with. If you need a truck or a trailer in the area of Natchitoches, Louisiana, I would STRONGLY suggest that you either deal with some other company, or at least find some other town and plan on driving extra distance to avoid Keep Safe Storage 5841 Hwy 1 Bypass Natchitoches, LA 71457

Didn't have the truck I was told I would be getting And it took over an hour to get a truck and get the paper work done.The lady at the front desk didn't know what was going even though we talked the day before and was extremely rude!Will not be using that uhaul place again

Keep up the good work

I would definitely NOT recommend this location to ANYONE. Not only did the staff over see the final details of my reservation my fiance and I deeply feel that we were definitely overcharged for a 5X9 trailer that we have rented many times in the past nor were these fees explained to us at the time of payment, The manager was walking around on a cordless phone on a call and simply just told us the site in San Antonio REALLY NEEDS this trailer so that is the reason WE are being charged for the rate we were charged which was $60 MORE than we have rented the 5X9 trailer before at other sites. No other details were given, we weren't even asked how long we needed the equipment for. Good Luck if you have to rent from this location! A VERY DISSATISSFIED CUSTOMER!

It was a bit chaotic . there was an auction happening that day and we had to wait quite a while to get our trailer. Even after waiting, they would have to stop processing our order and take money from people buying from the auction. Being on a time schedule that day, that was frustrating. However, the lady who helped us was very friendly and did her best with all she had going on.

The operator of this business was extremely nice and professional. If I ever find myself needing a U-Haul location in Natchitoches again, I would recommend this business.