I’ve been so inspired recently by U-Haul’s project, Moving Detroit, where an old abandoned building is being renovated and transformed back into a functioning, revenue-generating storage facility. I love the character and charm of classic buildings and homes. They have so much history and remind us of times when there was so much more attention paid to detail. In the spirit of yesteryear, I’d like to take a look at some of the most impressive and noteworthy historical homes in America. 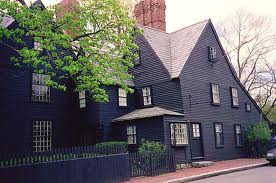 This famed property in Massachusettswas built in 1668, and is the oldest surviving 17th century wooden mansion in New England. The House of the Seven Gables inspired author Nathaniel Hawthorne to write his novel of the same name. Later, Hawthorne’s birth home was moved to The House of the Seven Gables and now lies just feet away from the mysterious mansion made famous in fiction. (source: 7gables.org) 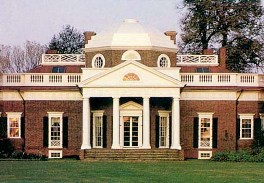 Thomas Jefferson’s famous residence was built in 1769, and was designed by Jefferson himself. What kind of digs does the third president of the U.S. require? This beautiful home comes with 11,000 square feet of living space, eight fireplaces, and 13 skylights. In 1800, Jefferson estimated the value of the home at $6300 for insurance purposes. Today, this historical home is priceless, and continues to be one of the most popular historic homes in America. (source: monticello.org) 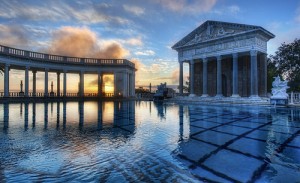 George Hearst was a wealthy miner who purchased the land that is now the location of Hearst Castle in 1865. He built what he considered to be his dream home on this property. Later, his only son William Randolph Hearst inherited the land. Hearst’s innovations in journalism have forever changed the way we learn about the news. Was this home the hibernating place for all of his new ideas and methods for success? Perhaps… Today, this beautiful estate sprawling over 250,000 acres is used as a museum, art showcase and garden getaway for visitors from around the U.S. (source: hearstcastle.org) 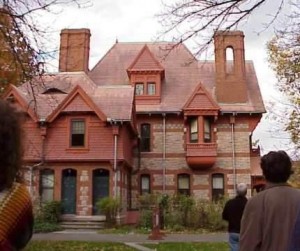 Sam Clemens, commonly called by his pen name, Mark Twain, spent most of his adult life becoming the famed author we remember him as today. The elaborate 25-room house on Farmington Avenue‚ which had cost the then-huge sum of $40‚000-$45‚000‚ is the birthplace of some of Twain’s most popular works. Today, you can visit this home and the museum that offers guests an inside look into one of the most seminal authors of American literature. (source: marktwainhouse.org) 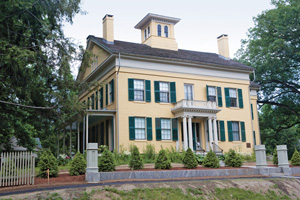 One of the most influential poets of American time, Emily Dickinson, grew up in this brick-style homestead in Amherst. During her adult years at the Homestead, Emily Dickinson began to write poetry in earnest. During her most productive period, 1858 to 1865, she compiled her poems into small packets now termed “fascicles.” Only ten of her poems are known to have been published in her lifetime, all anonymously and presumably without her permission. In 1963, in response to her growing popularity, the house was designated a National Historic Landmark. (source: emilydickinsonmuseum.org)

In many corners all around the U.S., history is waiting to be discovered. If you get a thrill from standing in the very same room a brilliant poet once stood, or taking in the same skyline as a politician once marveled, then take some time to uncover the gems that may be hiding in your city. For a list of historic properties by state, check out the list compiled by oldhouses.com.

Do you have a favorite historic home in America that inspires you? Let us know below in the comments!