Taking Your Life in Your Hands

Arm pinned beneath his overturned truck, waiting on the paramedics to arrive, Michael Richards thought about his life. Every beat of his heart sent blood rushing to his mangled arm, and Richards wondered if this was the end.

“All it took was 1.7 seconds,” Richards remembered. “The state police determined that I was driving distracted for 1.7 seconds. That short amount of time was enough to cause me to flip my personal vehicle and lose part of my arm.”

Driving down the two-lane country road that Richards traversed nearly every day for nine years, he knew every bend. When he grabbed his phone and read the text message, “It’s OK,” Richards didn’t realize that less than two seconds of distraction would create such a life-altering chain of events.

“Ever since my accident, I ask people one question: In the last few days, have you looked at your phone while driving?” Richards probed. “There aren’t too many people who can look me in the eye and tell me ‘no.’ And, they do it because they think they’re too smart.

“The next time you think you’re too smart, ask yourself if you can drive and text with one arm,” Richards advised. “Forget dying. Dying isn’t the worst thing that can happen to you. You may have to live with the consequences of your actions.”

For Richards, this was a hard lesson to learn. Not only did he have to overcome the significant physical challenges of losing part of his left arm, he had to come to terms with his new lifestyle both mentally and emotionally. His life and the lives of his family members were forever changed because of 1.7 seconds in time.

“Everything became crystal clear,” Richards recalled. “In what I thought were my last moments, I thought about what kind of person I was. Was I bitter, or loving and caring? Did I say everything I wanted to say to people? I was sad about all the things I might be missing out on. In moments like that, you bargain with God for more time.”

As it turns out, God was listening.

“I think that you don’t really know how to live until you face your own mortality,” Richards mused. “I believe the reason that I’m alive today is because God has a purpose for me.”

Seven months and 11 surgeries later, did Richards let this tragedy hold him back from returning to work and doing what he loves? Heck, no! He’s a walking, talking, rig-driving spitfire … and a cautionary tale of the perils of distracted driving.

Richards has made it his mission to be a source of inspiration and education for his local community. He’s spoken in several schools and churches, encouraging people to lead a safer life.

“I want young people to stand up to their parents or peers and tell them not to text and drive,” Richards declared. “And, I want adults to do the same. The message is: Don’t take your life, or the lives of others nearby, into your hands by being distracted for even one second. If that message helps save just one person, then I’m happy.” 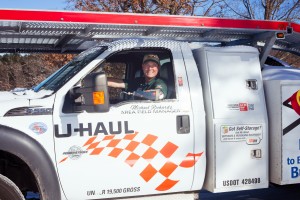 Moving Insider would like to thank Michael Richards, an area field manager for U-Haul International, for sharing his story with us and encouraging others to stop distracted driving

What have been your experiences with distracted driving? Share your stories with us in the comment section below!