When you think of moving, you probably think of hard work, long days and sore muscles. But a moving day isn’t just any other day. It is special because it symbolizes the end of one phase in your life and the beginning of another. For one U-Haul customer, it was day that included a really special moment with a very special someone:

Cambron was moving from Kentucky to California and decided that his best option was to tow a U-Haul trailer behind his truck to move all his belongings. It is a long drive but he had his girlfriend as co-pilot. After a long drive to Los Angeles they arrived to his new home and began unpacking.

After unpacking Cambron decided to try out a new camera application on his phone and started taking some snapshots. The two of them cracked open a couple of sodas (Ale8one’s to be exact), set the phone up against a rock, set the timer and took this photo. 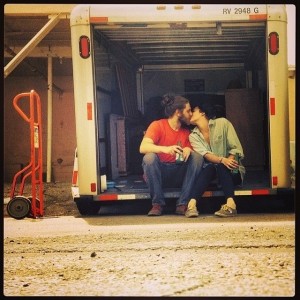 When Cambron shared it with U-Haul, he said, “I feel lucky to have taken this at just the right moment….I hope it at least makes someone at U-Haul smile – it’s a great memory to have captured.”

So remember, moving days aren’t just days full of work. They are days full of memories you will want to keep for a very long time. You can make your moving memories last even longer by submitting it to U-Haul to become #UhaulFamous. Just submit your photo here and it could be selected to be placed on the side of a U-Haul truck!

Do you have a great moving memory? Let us know in the comments below!