I don’t know about you, but Star Wars is so much more than a series of movies for me. My childhood was full of lightsabers, Jedi, and unforgettable characters such as Darth Vader. I’d watch the movies over and over again and play every single Star Wars video game I could get my hands on. It may sound strange, but it actually taught me a lot of things about life. I’ve also realized that many of the great lessons I learned can be applied to the moving process as well. Don’t believe me? Let me prove it. 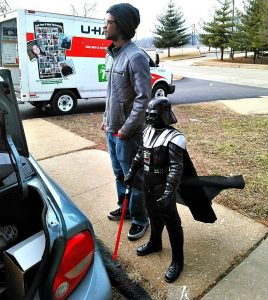 Ever heard of Yoda? You know, the legendary Jedi Master who, in his prime, held up against the likes of Count Dooku and even Darth Sidious? Sure he’s short, but every inch of his 2 foot stature is jam-packed with wisdom, and this quote is no exception. When you’re getting ready for a move, things can get really rough sometimes. Early on in the process, you need to start packing, book a truck, and plan out when the ideal time is, among many other things. No matter how hard it gets, never say you’re going to “try” to do something. Do or do not, there is no try.

But if you try and fail, you can always hire some Moving Help to get you back on track again.

Qui-Gon Jinn might not be quite as iconic as Yoda, but he was still a superb Jedi Master and a great teacher to Obi-Wan Kenobi. If things start going wrong on your move remember, your focus is your reality. If you focus on the fact that you’re running late getting to the new house, you’re going to be anxious and not have a good time. Meanwhile, if you forget about that and focus on all the fun you’ll have in the new place, your whole experience is going to be 100 times better.

Davish Krail is a relatively unknown name in the Star Wars universe, but this quote is one of the most memorable from A New Hope. He says this to keep the other pilots focused on their mission as they are flying to destroy the Death Star. Moving day can get crazy, but you absolutely need to stay on target. Don’t put off making that trailer reservation… stay on target. Don’t wait until tomorrow to clean up the house you’re selling so you can go clubbin’ at the Tatooine Cantina tonight… Stay on target. You’ll be glad you did later.

Lesson #4: “In my experience, there is no such thing as luck.” – Obi-Wan Kenobi

The one who trained both Anakin Skywalker and his son Luke; Obi-Wan Kenobi was well seasoned in the force, and this led him to hold immense wisdom as well. This quote kind of goes along with the one above. You need to set yourself up for success, not depend on luck and hope everything goes okay. How do you set yourself up for success? Get the work done, and get it done early. Buy those moving boxes and start packing well before you need to. Come up with a plan or schedule that details when each step needs to be finished. By doing these things ahead of time, your move will go as smooth as the First Battle of Geonosis.

Han Solo was a stuck up, half-witted, scruffy-looking nerf herder, as described by Princess Leia. Throughout the saga, Han proved to be full of wit and had a keen sense of how to keep himself and everyone around him alive. He was also an excellent pilot, and sometimes driving a giant moving truck can seem as intimidating as trying to fly the Millennium Falcon. If you’re scared of driving one for the first time, don’t worry, plenty of people have been in your shoes before. Driving a moving truck is not as hard as it seems, but it is different than driving a regular car. Take things slowly and check your mirrors a lot, and you’ll do fine. After all, it’s not like you’re traveling through hyperspace.

Final Lesson: “I’m rather embarrassed, General Solo, but it appears that you are to be the main course at a banquet in my honor.” – C-3PO

The Ewoks believed C-3PO was “the Golden One”, a god prophesied long ago to one day appear to their civilization. What was the first thing they decided to do to welcome him? Throw a banquet! My final piece of Star Wars moving advice is to buy a bunch of food and invite friends over on the move-in day. You can celebrate moving in and have some extra help getting everything off the truck at the same time. The Ewoks knew how to party; it paid off for them in the end, and it will for you too!

What’s your favorite piece of wisdom from Star Wars? We want to talk about it! Tell us in the comments!