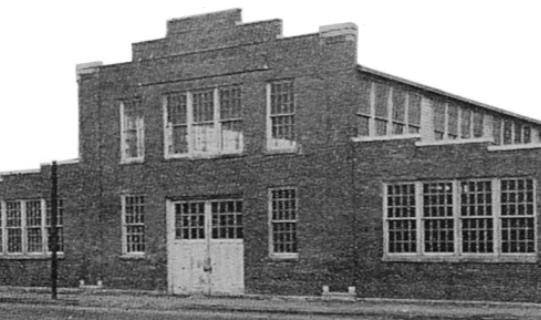 U-Haul Moving & Storage of Walker's Point is made up of three unique buildings with rich and varied histories. The U-Haul showroom is in a brick facade building at the north end of the property. This unique stepped front building was built in 1925 and once belonged to the George J. Meyer Manufacturing Company. George Meyer was a foreman at a bottle soaking machine manufacturing plant. Playing on his expertise, he developed an attachment to the soaking machines that would become known as the first automatic bottle brushing machine. Milwaukee has a steeped history in beer brewing and historically there was a great need to thoroughly clean returnable glass bottles for reuse. The Geo. J. Meyer Mfg. Co. would become the self-proclaimed "largest plant in the world making bottle cleaning machinery".

The steepled building in the middle of the property was built in 1890 and was formerly occupied by Davis Bros. and Bastian Manufacturing Company. Davis Bros. refers to Oscar and William Davis who were brothers that were raised in the family's boiler manufacturing business. In 1890, their father sold the family business, Marine Boiler Works, and the boys took it upon themselves to establish a new manufacturing plant that would specialize in general boilers and specific equipment for breweries.

The third historic building is situated on the corner of Lapham Boulevard and 1st street and formerly held the Grede Foundry Company. The structure was originally built by B.J. Danielson as a three-story building in 1913. In 1914, an additional two stories were added to the structure and the final sixth story was added in 1925 to accommodate manufacturing growth. Grede Foundries, Inc. was formed by William J. Grede in 1920 in Wauwatosa, Wisconsin. The foundry is famous for creating iron castings for a variety of internationally recognized products.

U-Haul Moving & Storage of Walker's Point received a designation that only one other business in Milwaukee can claim. The U.S. Green Building Council (USGBC) awarded the center its prestigious Leadership in Energy and Environmental Design (LEED) Silver Certification for commercial interiors.

“This is a prestigious and substantial accomplishment that is a big honor for everyone on our team,”

The warehouse was occupied by several companies before it was vacated in 2000. It sat empty for eight years and became an eyesore in the community, until U-Haul acquired the property, referred to by locals as “The Foundry” because it was previously home to the Grede Foundry. Schneider and his team worked closely with the U-Haul Construction Team to renovate the deteriorated buildings and adjacent land to be used as a moving and storage center, with a focus on sustainability and preserving many aspects of the historic facility.

“The primary goal for the U-Haul Team was to reuse and recycle as much material as feasible, while installing as many new sustainable design features as possible,” Schneider emphasized. “We built the showroom in an existing warehouse using two of the exterior walls, but the rest is all new construction. The U-Haul Construction Department handled the design and helped us get the needed LEED points.”

New elements of the facility include efficient lighting with day-lighting controls and occupancy sensors, a high-efficiency HVAC system used in conjunction with a newly constructed thermal envelope to help reduce energy consumption, and the installation of low-flow fixtures to reduce water consumption. Pieces of the machinery and mold castings left behind by previous tenants are displayed in the showroom, further helping to preserve the building’s history. Now, anyone who comes to the center knows of the prestigious designation—and the Company’s commitment to sustainability—because a plaque denoting the facility’s LEED Silver Certification hangs proudly on the wall.

Serving U-Haul customers since 2008, this facility was built through adaptive reuse of an abandoned building. Adaptive reuse promotes infill development in an effort to strengthen communities, with the following benefits achieved at this site:

Energy-efficiency and waste-reduction programs at this facility provide the following estimated benefits each year for the Milwaukee community: