Serving U-Haul customers since 2012, this facility was built through adaptive reuse of an abandoned building. 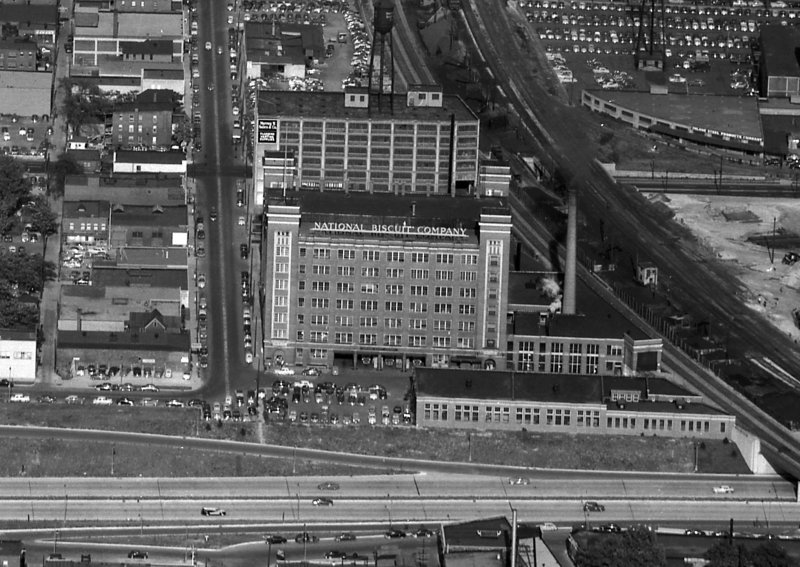 Detroit was once an engine of growth for the entire country; essential to American mobility. The American auto industry, coupled with the development of the interstate highway system and the birth of the do-it-yourself moving industry created by U-Haul, helped fuel the American dream, making it possible for Americans to move to a better way of life. Detroit has built the cars that customers have used to tow our trailers since 1945. It is only appropriate that U-Haul step up. While other businesses leave, U-Haul will not abandon Detroit.

In line with continuing a revitalization strategy introduced in the 1970s, that of buying and repurposing existing buildings to help us serve our do-it-yourself moving and self-storage customers, U-Haul purchased the seven-story National Biscuit Company (NBC or Nabisco) building at 899 West Baltimore Avenue in New Center. U-Haul centers and neighborhood dealerships in the Detroit metro area, including U-Haul Moving and Storage of New Center, provide needed jobs, goods and services to the community.

“We will be a national brand name investing in the New Center community. We will provide a safe, acceptable refuge for urban pioneers as they reenter and secure their new residences and businesses in the area. Our entry will reinforce efforts made by others to stabilize the area.”

Built in 1920, this historic seven-story building is the result of the collaboration of Adolphus Green (1843-1917), first chairman of the board and later president of the National Biscuit Company (Nabisco), and his architect, Albert G. Zimmermann (1866-1947). Green wanted factories that would have style and dignity to inspire loyalty from the workers and act as models of modernity to the communities in which they stood.

National corporations were in their ascendancy at the turn of the century and architectural uniformity was a new concept for the time. The Nabisco buildings were different from the common manufacturing buildings of the World War I era. Each of the new plants included showers and locker rooms for the employees as well as fireproof stairways and other up-to-the-minute fireproofing techniques.

The factories were twice published in the American Architect magazine in 1912 and 1916 for their trendsetting fire-safety measures including the steel framing and fireproof tiling, and their use of 1-1/2” maple flooring and architectural embellishments above and beyond the normal requirements for factory buildings.

The U-Haul renovation to this abandoned 1920 landmark building reused as and recycled materials where feasible while installing new sustainable design features where possible. The revitalization of this facility created more than 930 indoor, single-level self-storage rooms, providing more than 62,790 square feet of self-storage.

Adaptive reuse building conversions allow U-Haul to promote infill development to meet citizens’ needs while preserving the natural resources and land normally required for new construction. Adaptive reuse also allows resources to be focused on integrating environmentally thoughtful features into the existing building rather than creating waste in the form of demolition and using valuable resources for new construction.

Serving U-Haul customers since 2012, this facility was built through adaptive reuse of an abandoned building to help revitalize the city of Detroit. Adaptive reuse promotes infill development in an effort to strengthen communities, with the following benefits achieved at this site:

Energy-efficiency and waste-reduction programs at this facility provide the following estimated benefits each year for this Detroit community: