Adaptive Reuse at U-Haul Moving & Storage at I-75 & Detroit 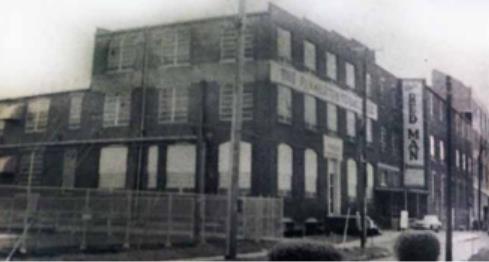 Thusands of businesses struggled during the Great Depression and among them Pinkerton Tobacco Company. Despite the hard times, Pinkerton Tobacco Co. managed to not lay off a single employee. The company also felt immense pressure during WW2 and had to make adjustments to their classic chew recipe as a result of sugar rations. This recipe would be utilized between 1942 and 1950, using natural sugars extracted from fruits. Pinkerton became the first manufacturer to pack its brands in resealable foil pouches in 1967, giving them a marketable advantage over the competition.

Pinkerton produced their tobacco products in Toledo for nearly 70 years. In the 1970’s they opened a new plant in Owensboro, Kentucky ultimately moving their headquarters to Richmond, Virginia in 1986. Pinkerton launched a moist snuff in the 1990’s, consistently expanding their multitude of brands while increasing their volume. The Pinkerton brand is still popular among tobacco product consumers and they maintain production from their Owensboro, Kentucky facility.

The Pinkerton Tobacco Company building was built in 1880 and U-Haul acquired the building in 2015. Adaptive reuse building conversions allow U-Haul to promote infill development to meet citizens’ needs while preserving the natural resources and land normally required for new construction. Adaptive reuse also allows resources to be focused on integrating environmentally thoughtful features into the existing building rather than creating waste in the form of demolition and using valuable resources for new construction.

Waste-reduction programs at this facility provide the following estimated benefits each year for this Toledo community: