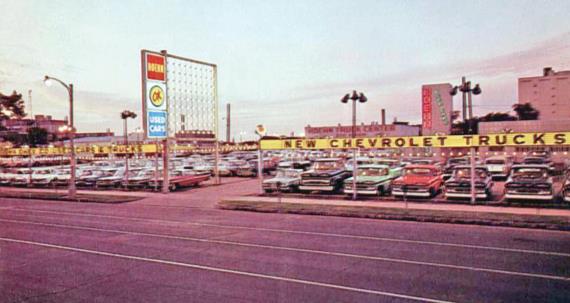 The Hoehn family first opened their sales and service automobile business in 1927 with the original Hoehn Chevrolet in Memphis Tennessee. Theodore W. "Bill" Hoehn is credited with founding the business in Memphis. He retired for a short period of time, before becoming restless an founding Hoehn Motors. The Hoehn family has expanded their business over the years, moving across the nation to California. The Hoehn name has taken part in some of the most influential auto trends of the 21st century. Currently the family deals mostly in premium brands including Mercedes-Benz, Acura, Audi, Buick, Cadillac, Jaguar/Land Rover and Honda.

The Hoehn Chevrolet at 370 Union Ave is also credited with the alignment and happenstance meeting of Johnny Cash and his two backing musicians, Luther Monroe Perkins and Marshal Grant, also known as the Tennessee two. Roy Cash Sr., who was Johnny Cash’s older brother was the service manager at the Memphis Hoehn Chevrolet in 1953. After Johnny Cash returned from Germany in 1954 his brother Roy introduced him to Perkins and Grant who were coworkers at the Hoehn Chevrolet. The coworkers would often play music when the service station was slow and eventually began playing together at home and in their spare time, later creating what would be Johnny Cash and the Tennesse Two.

The Hoehn Chevrolet building was built in 1938 and U-Haul had the opportunity to acquire the historical building in 1977.

Energy-efficiency and waste-reduction programs at this facility provide the following estimated benefits each year for the Memphis community: