250 Appleton St
Holyoke, MA 01040
(located at the corner of Newton street and Appleton) 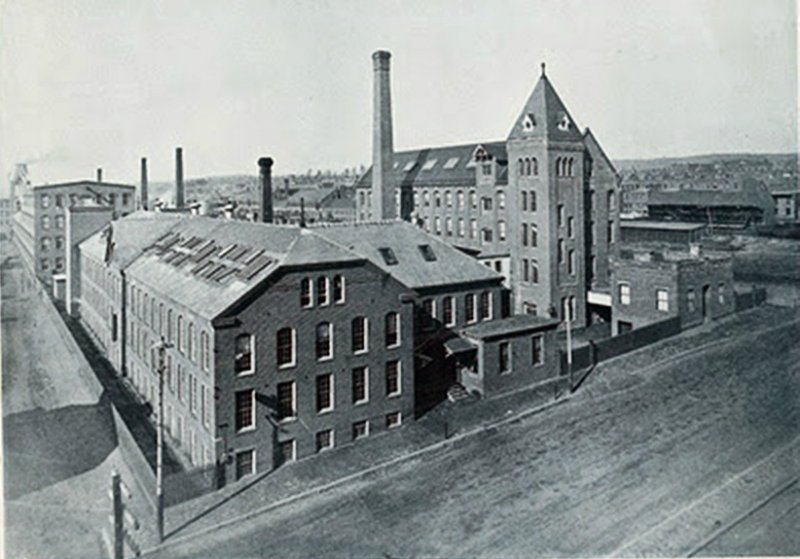 Founded in 1848, William Skinner and Sons was known for manufacturing a variety of textiles, specializing in silk products. The founder, William Skinner, was an English immigrant who arrived in the United States in 1845. Skinner utilized his prior knowledge of the silk industry to create the Unquomonk Silk Company. Skinner's original factory in Williamsburg, Massachusetts was flooded when a dam broke along the Mill River in 1874. The flood caused devastating financial losses, but Skinner was determined to rebuild. He was enticed by a generous offer from the Holyoke Water Power Company to rebuild his manufacturing plant along the Connecticut River. The Holyoke Water Power Company offered him an entire city block for a personal residence for the price of $1 and a mill site free of rent for five years. In 1897, Skinner rebuilt the company mill along the First Canal of the Connecticut River and experienced a vigorous growth in silk products and sales. Skinner's sons joined the business in 1886 and the company name was officially changed to William Skinner & Son’s Silk Manufacturing. By 1912, this family-owned company was one of the largest silk mills in the world.

William Skinner and Sons became popular in Hollywood, creating silk gowns for stars like Bette Davis and Joan Crawford. The company contributed to the wartime effort, creating high quality silk products for parachutes for U.S. paratroopers in World War II. The William Skinner and Sons satin and silk mill building was acquired 98 years later for adaptive reuse by U-Haul in 1995. Adaptive reuse building conversions allow U-Haul to promote infill development to meet citizens’ needs while preserving the natural resources and land normally required for new construction. Adaptive reuse also allows resources to be focused on integrating environmentally thoughtful features into the existing building rather than creating waste in the form of demolition and using valuable resources for new construction.

Serving U-Haul customers since 1995, this facility was built through adaptive reuse of an abandoned building. Adaptive reuse promotes infill development in an effort to strengthen communities, with the following benefits achieved at this site:

Energy-efficiency and waste-reduction programs at this facility provide the following estimated benefits each year for the Holyoke community: