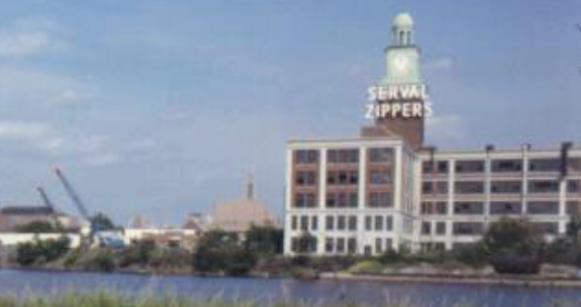 This building was built between 1925 and 1928 for the Company of Master Craftsmen, a subsidiary of W. & J. Sloane. The Company of Master Craftsmen were known for building fine furniture reproductions. In 1942 the company vacated the building, at which time it was then purchased by Serval Slide Fasteners Incorporated. There is very little information available on the history of Serval, but the company carries notoriety to Mets fans because of the large "SERVAL" neon sign that used to be on the clock tower and could be seen from Shea Stadium.

Serval sold the building to U-Haul in October of 1979. The large tower clock is a 1925 Seth Thomas #7 tower clock which was delivered to the building on August 1st, 1925. The original clock had a gravity escapement and 1-1/4 second beat pendulum with an automatic winding device. Somewhere along the way, the original gravity escapement was removed and converted to a motorized action.

Sometime more recently, the south and possibly north motion clock works seized causing damage to some of the original bronze gears. The north motion works were removed at some point, and until recently, the south clock hands were caught on an errant cable coming from the top of the cupola. We are working with volunteer clock experts and enthusiasts to restore the clock for the community. Our plan is to restore nearly all the original parts since the conversion and have the clock running as soon as possible!

Energy-efficiency and waste-reduction programs at this facility provide the following estimated benefits each year for the Flushing community: