Rust is the chemical reaction that occurs when iron, steel or other alloys are exposed to oxygen and air moisture and become corroded. Using your hitch for camping, mountain biking, towing or other outdoor activities puts your hitch at risk to corrode and rust over time which can cause trailering complications and safety concerns. 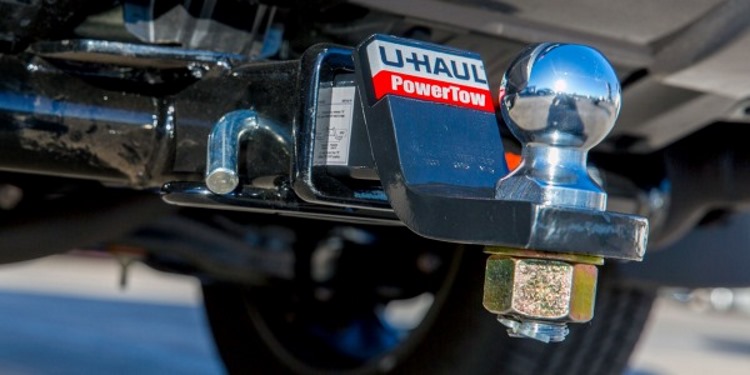 The hitch above is a brand-new receiver hitch and ball mount that you would get installed at your local U-Haul hitch store. All our hitches are powder coated and our ball mounts are either powder coated or zinc finished (galvanized) to protect them from the elements and prevent rust.

A powder or zinc coat will protect hitch components for a long time. However, after repeated use and exposure, areas like the inside of the receiver and the hitch pin holes see frequent use and friction which can cause the coat to wear away, exposing the steel to the elements. If water gets into those exposed areas and is allowed to sit, it will corrode the metal and cause rust. To prevent moisture and debris from getting into the receiver opening,use a product like Fluid Film to coat the interior of the receiver and then use a hitch cover when you’re not using the hitch. 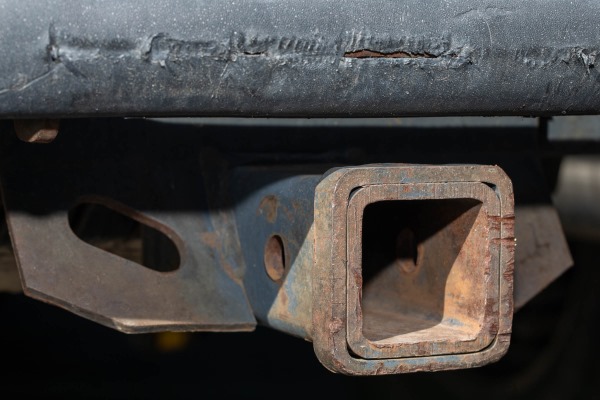 Despite your best efforts to prevent rust, it may still find its way onto your hitch. All is not lost however, and with these tips you can fight the rust and prevent it from happening again in the near future.

While all U-Haul hitches come with a protective coating, it can still be worn away over time with heavy usage, improper care and overexposure to the elements. Look for corrosion around the hitch pin holes and the interior of the receiver opening. If you notice spots that have worn out the powdered coating, you will want to touch those up with a rust stopping paint to reseal the metal underneath. If it has started to rust already you want to remove that rust with a homemade or store-bought rust remover and then apply the paint over it. Do not paint over rust as the corrosion will continue underneath.

Similar to the receiver, the ball mount will be powder coated as well to prevent rust. After a while it may begin to show signs of wear and tear, causing the metal underneath the paint to become exposed to dirt and water which will cause rust. If you find dents or spots that are starting to rust, clean them thoroughly with a homemade or store bought rust remover and then apply rust-resistant paint to the area. Do not paint over rust as that will not prevent the corrosion from continuing underneath.

The hitch ball is the portion of the hitch system that is most likely to see a lot of wear and tear from the elements and general use. If using ball grease and a ball cover has failed to protect the ball and you find rust has taken hold of it, you can attempt to clean it using a homemade solution of distilled vinegar or store-bought products. Once the rust has been removed, continue to liberally re-apply ball grease during use and use a ball cover or hitch bag to protect it when it’s not being used.

If your ball mount or hitch ball are rusted beyond repair, you will need to remove them from the trailer hitch to be able to replace it under the $5 lifetime warranty through U-Haul. A rusty ball mount can get stuck in the receiver opening and be hard to remove. Try spraying the areas around the receiver opening with WD-40 and then use a rubber hammer to help knock the ball mount loose. Once it’s free you can either pull it out or gently tap it out with the hammer.

If just the hitch ball needs replacing but it’s stuck inside the ball mount then you’ll want to follow a similar strategy to the ball mount. Spray a good amount of WD-40 or similar lubricant around the ball nut and thread areas. Attempt to dislodge the nut using a wrench. If it’s still stuck then you can try using another round of WD-40 and even a pipe on the end of the wrench to give yourself more leverage.

Don’t worry, if a ball mount is rusted in your hitch and you can’t remove it, U-Haul will still replace your receiver hitch under the $5 warranty.The best form of maintenance is prevention. By purchasing your hitch, ball mount and hitch ball through U-Haul ensures that you will be protecting your investment and continuing your towing adventures.