A $100 bill is equal to $100, right? Wrong. Although the denomination is the same, Benjamin has more buying power in certain states compared to others. The Tax Foundation calculated the value of the hundred dollar bill based upon the varying price for goods in different areas. It ranges from a worth as low as $85.32 in Hawaii, all the way up to $115.74. When deciding where to move, the cost of living should weigh on your decision when choosing your new home. Before you load your moving truck, take a look at the 5 most affordable states in the United States. 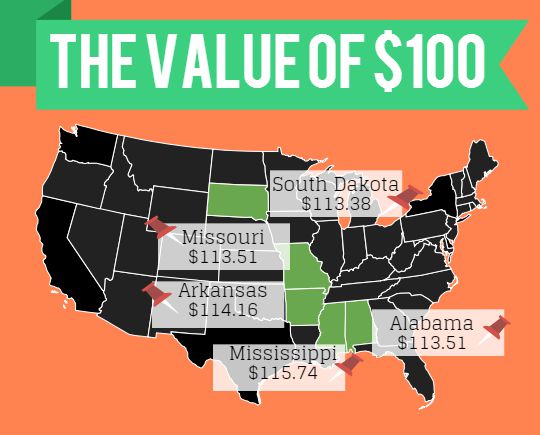 Benjamin Franklin may not be included in Mount Rushmore, but the value of a $100 bill ranks 5th in the nation. In this Midwestern state, $100 is really worth $113.38. Paired with the 4th best unemployment rate in the country, South Dakota is a prospering state where you get more for your money. With a population of over 850,000, popular cities include Sioux Falls and Rapid City. Did you know that Mount Rushmore was one of the first super graphics to be featured on the side of a U-Haul truck?

The Heart of Dixie state could leave you with a wallet of gold because $100 is really worth $113.51. With a population of over 4.5 million people, popular cities in Alabama include Birmingham, Montgomery, and Tuscaloosa.

The Show Me State finishes third on the list of most affordable states to live in. A population of about 6 million people stretches $113.51 worth of goods out of $100. Missouri is home to Saint Louis and the Gateway Arch, as well as Kansas City.

Continuing the reign of southern dominance, the value of a Benjamin is $114.16. With a population almost reaching 3 million, popular cities include Little Rock and Hot Springs.

Neighbor to Arkansas, Mississippi receives the top honor for the most affordable state to live in. $100 dollars here equals $115.74 worth of goods. Popular cities include Jackson, the capital, and Biloxi. The Magnolia State is home to 2.9 million residents and has the most bang for your buck.

As expected states including Hawaii, California, New York, and New Jersey ranked the highest in cost of living, and get the lowest value for $100. If you want to move to a place that will be easy on your pocketbook then look no further than the 5 most affordable states to live in.

What tips can you offer to someone moving to these 5 states? Share it with us in the comments section below!