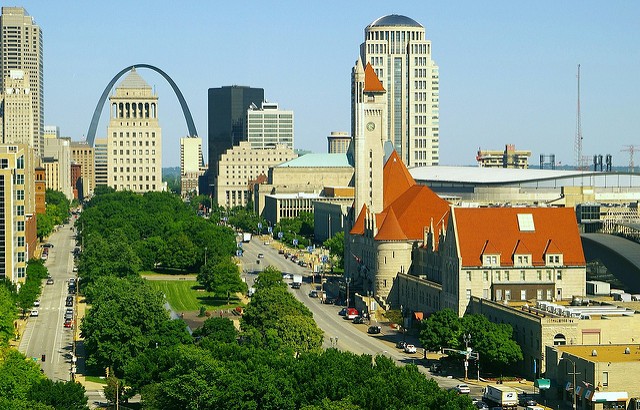 St. Louis–the Gateway to the West–lies on the western bank of the Mississippi River, bordering Illinois. The city, along with neighboring suburbs, was Missouri’s largest metropolitan area in 2014 with approximately 2.9 million residents. St. Louis is also one of the most populous cities in the United States. Here’s what you need to know about moving to St. Louis, MO.

The Gateway Arch is one of the most recognized symbolic symbols in the United States–representing America’s westward expansion–and a must-do for visitors and St. Louis residents, alike. You can take a ride to the top and take in all of the views the city has to offer. You can take a tour of Busch Stadium, home to the 2011 World Series Champions, the St. Louis Cardinals or enjoy a great game of America’s Favorite Pastime. Families moving with little ones will enjoy the Saint Louis Zoo and Missouri Botanical Garden. Thrillseekers can explore their adventurous side at Six Flags St. Louis, Missouri’s Coaster Capital!.

St. Louis lies in a transitional zone between humid continental and humid subtropical climate. Because there are no major mountains or bodies of water to help regulate temperature, St. Louis experiences hot, humid summers and frigid winters. Spring in St. Louis sees the most precipitation and is subject to tornadoes, winter storms and approximately 48 thunderstorms per year. Fall temperatures are mild, with lower levels of humidity, which is ideal for moving. Fall colors and foliage peak in mid-late October and the city typically sees its first measurable snowfall in early December.

Do you have tips for those considering a move to St. Louis? If so, leave them in the comments section below!