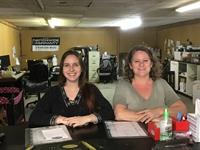 Customer Reviews for Get Gone Auto

Testimonials from recent customers of Get Gone Auto

Slow, not ready for me even though the truck was in their control the day before my reservation. Inspection was nil. I checked the oil and it was low (they filled it), they missed a driver side cracked windshield (Spider web) and a broken step on passenger side. Took 45 minutes to check out. They struggled with the UHAUL website. Even tough I electronically checked out two days prior, they required my drivers license information, printer had no ink, and I signed essentially a blank page in order to leave. My reservation was with a high quality place on Pierce Road in Oakland and I was routed by your system to this location. Will not repeat this process because I don't want to go there again. These are nice people. That's not the problem. It's quality and speed.

Online check in / out is simply awful

Maybe have better parking for returning trucks is the only thing.

Very satisfied with the experience of using this facility.

I had the worst experience with you all. My appointment was for 5/30 @8:30AM. I arrived at the location met a young lady who didn't care to help anyone. She told me you had NO trucks and tried to send me to Bartlett on 64 to get the truck. That was only after going round and round with her about my reservation. Where she finally looked in the system, to say my truck was in Bartlett TN. I started to head that way, and called in advance. They had NO trucks and nothing for me. That young lady told me to call 800 number. I called and spoke with a Sharron, who informs me she had called and texted and emailed me telling me that my truck was in Oakland TN. Due to all the craziness I had not looked at my phone yet. When I did I saw where she had at 8:20 am. I was already in the store. A call the day before would have been better. I drove ALL the way to Oakland to find my truck. computers were down, however I was given the code to get the key. I find that I have NO dolly, that I had reserved as well. Go back to original Summer Ave location to get a dolly. Was told by the SAME girl that, computers are down, we would have to use cash. walked over to gas station got cash. We go back and had a different lady help us, and she says NO you have to pay with Credit card, but our machine is down. she tries several times to run it. it doesn't work. So we had to buy a dolly $60, to move our stuff. Now we are looking at 11:15 where we finally get back to the house to start our move that should have began @ 8:45 ish.. I finally get a call 5:19pm from U-Haul asking if I still need my truck. I told the girl what happened, and told her I need a manger. She said that she would have to open a complaint, and I would get a call in 72 hrs. But I had to be charged the Uhaul cause as of right now, I had stolen the truck.. I was given the code to get the keys, I didn't steal the truck. She said well I have to charge you and open a ticket. I told her I didn't want to be charged until I spoke with someone. She charged me anyways. I need a manager to call me ASAP!!! 901-497-7409. I have rented with you guys 3 times, this was the worst experience and costly experience I had with you.