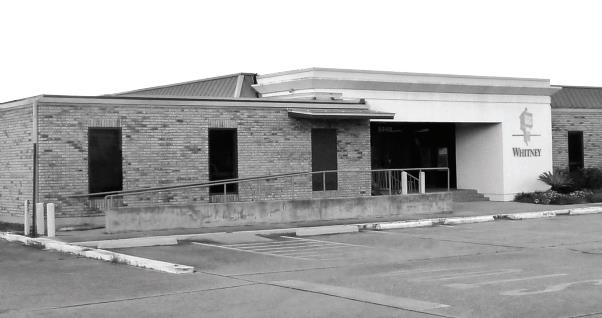 Whitney Holding Corporation is the oldest continuously operating banking firm in New Orleans. Whitney National Bank was originally founded in the early 1880's by 25-year-old George Q. Whitney and 11 other investors. The bank experienced early success and was able to settle into the iconic building on Gravier Street, in 1888. In 1905, the bank became affiliated with Germania National Bank and the Central Bank Savings and Trust Company and changed the name to the Whitney Central National Bank. The merger allowed the company to charter both national and state banks and avoid the some of the more strict regulations on national banks. In 1933, John D. O'Keefe helped oversee the reorganization of the affiliates into a single corporate entity, the Whitney National Bank. Even in 1935, great depression era, the bank was still able to thrive enough to pay regular dividends to the stock holders but also splurge on a $300,000 modern air conditioning system for the main office. In May of 1962, the Whitney shareholders created the Whitney Holding Corporation, which is now the parent company of the current Whitney system of subsidiaries. The Whitney Bank building in Harvey was built in 1975 and U-Haul acquired the building in 2012.

Serving U-Haul customers since 2012, this facility was built through adaptive reuse of an abandoned building. Adaptive reuse promotes infill development in an effort to strengthen communities, with the following benefits achieved at this site:

Energy-efficiency and waste-reduction programs at this facility provide the following estimated benefits each year for this Harvey community: