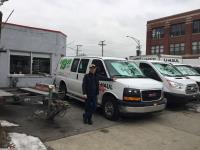 Moving to or from Chicago, IL 60651? Get FREE truck rental rate quotes at Priority Tires & Service LLC. rental trucks are specifically engineered from the ground up to assist moving families, not freight. Our moving trucks have more safety features than other moving trucks in the industry including gentle ride suspension and high visibility mirrors to assist the driver. Whether you are moving a smaller apartment or a large four-bedroom house, truck rentals in Chicago, IL will provide you with the moving truck rental you need to get from point A to point B. Find the perfect size moving truck to assist with your move, is home of the $19.95 rental truck!

Simply click on each moving truck shown above to view individual truck specs including: safety features, towing capacity, fuel economy and of course, the available space-per-truck size. Each rental truck is individually priced to help save you money, time and energy on your move to or from Chicago, IL.

U-Haul cargo van rentals and pickup trucks in Chicago, IL are perfect for home improvement projects, deliveries and other small loads. Rent cargo vans or pickups to save money on local moving or deliveries. Cargo van and pickup truck rentals are popular with local business, college students and smaller housing moves in Chicago, IL 60651. Our moving van rentals include air conditioning, rub rails to protect your belongings and come equipped with a hitch to tow a trailer rental. is the home of the $19.95 cargo van rental in Chicago, IL, reserve a van for your moving needs from Priority Tires & Service LLC!

Great service. I was in and out. When moving no time to waste.

I emailed this location when I was billed an additional $45 for a fuel fee. They claimed the tank was at 1/4 level but when getting into the car it was just below the quarter tank which is a exactly how I returned it. I still have not gotten a response meaning they realize they're in the wrong but like billing customers any additional money for their profit.

No place to park the truck. Left wondering where you should leave it

I had to go to 4 different locations to get my truck. No one called to inform me my selected pick up location would not have my truck. Further more someone had my truck and didn't return it on time. Orlando was amazing as was the woman at the 105 Pulaski location. They had excellent customer service and I am appreciative they were able to help rectify uhauls error.

Our location was switched on us 3 times without notification. Our time with the truck was shortened without our notification. There was little to no communication on anything changing which caused tremendous stress on our moving day. Truck was old and super banged up. Dolley that we prepaid for was forgotten and we had to remind the workers again that we had paid for one and needed one. Customer service was rude to us, and we sat on hold just to be hung up on twice. Will not use uhaul again and will not recommend it to others.

Receptionist was very friendly and understanding, but one of the older male employees tried to blame me for a dent on the vehicle which was corroded (it had to have happened months ago). First, this employee asked if I had purchased the 25$ insurance and after I told him I did not, he proceeded to blame me for the dent. I asked the friendly receptionist if the dent was there before I rented it and she affirmed that the dent has been there already. Also, the inside of the van had shattered glass and a brick, which was also blamed on us.

The staff was really friendly and the van was incredibly clean and in great shape! Thank you!!

The floor of the van was fairly dirty when we got it, which I hadn't expected and didn't have any towels or drop sheets prepared, so I ended up having to clean everything off when I got it to my destination.

I am so happy I rented my U-Haul from this location! The staff are extremely friendly and helpful!

Johnny was great with consumer service and my reservation. Helped us with getting the trailer hitched to our car. Checked to make sure the directional lights, brake and hazard lights were all connected. Really a smooth experience. Nothing to improve great job! :)

Thank you to Johnny and the crew! Great experience.

The service representative was great, he made sure the trailer was in good condition, but I wouldn't recommend this location because of its location. When I made the reservation it was to a location near my home not 30 miles away and was informed of this location 2 hours before pickup time.

last minute told the truck was not available at my location, with no explanation (despite trucks being, in fact, vehicles that could presumably be moved between locations?). However they were willing to bring the truck to me after I expressed unwillingness to pick up from a location not accessible by transit, so that was an acceptable accommodation, albeit grudgingly give. Also on the day of moving Uhaul was unable to provide the equipment which they had encouraged and (by way of contracting only with moving help companies which are instructed not to provide their own equipment) effectively required I rent. No explanation, accommodation, or apology was provided for the failing, with the uhaul representative stating only, on multiple occasions during separate phone calls "well, shit happens" and drawing false equivalences between his inability to provide the promised and paid-for service to natural disasters and pandemics. If uhaul had advertised and provided only the truck, I would have been happy. I would have made separate plans for movers and equipment, and been thoroughly pleased with the rental truck company providing an excellent truck as promised. But after heavily advertising, recommending, and contracting with servicers that require rental of equipment as well as vehicles, I am left soured on the whole experience. The truck was fine, but the company's overall attitude left a bad taste, and I would consider another, more responsive, company for future moves.

Give Johnny a raise, he's the man. Spotted a nail in the tire and fixed it before it became an issue.

The handover was a little brusque, though everything was covered.

We did not have a great experience in terms of vehicle and the end amount we had to pay. The vehicle had tire filled errors on the dashboard, meaning we could not see the original mileage on the truck. The gas monitor view only showed 3 Quarters filled and the man we worked with told us to fill it back to where it was. We filled it with two gallons after we were done because the 10 foot truck gets 12 miles per gallon and we only went 10 miles. The original negotiation was $57.09 from moving from 2427 West Augusta Blvd 60622 to 1435 W 15th St, Chicago, IL 60608. The final fee came down to $102.33. The total distance negotiated was 10 miles because we only lived 3.9 miles from the new apartment. We were charged for 24 miles and had to pay a 6 gallon EZ Fuel Sales fee for gas we never used. We picked up the truck at 9:30am and brought it back before 3:00pm.

My return receipt is not correct. I disputed it via the return process on the website and was never contacted but was charged regardless. I did not receive or use a dolly or furniture pads but was charged for them. I returned the truck with a full tank of gas. Both of these can be confirmed via my return photos.

Nothing on this experience. I would particularly like to commend Johnny who assisted us throughout the prep process. He was responsive, helpful, friendly, efficient. U-Haul is fortunate to have him on their team.

I was charged twice because the manager at my Uhaul location called saying the rental didn't go through in their system after I used the self service app pick up. I had told her I had received an email the appointment had been changed to in app 24/7 pick up and that I followed the prompts in the app and was already set. She insisted it did not show in their system I had checked out the truck I did and that we go through it a second time. I was charged double because of this and have the receipt confirmation numbers for both. I need a refund due to the managers mistake and incompetence.

if its c lose and you need a uhaul

First, I was not able to get my desired 10' truck. Then when I went to pick the cargo van, they key for the van was not in the lock box. I was then assigned another cargo van. When I got inside the van was at a quarter tank. I used the van for about 8 miles, and got charged for 9 gallons of gas (ridiculous). This was not a smooth process as advertised and got over charged for gas. The saving grace was the friendly staff. Really wish there was a representative present from the get go, which would have made the issues more bearable.