Adaptive Reuse in Brampton, ON at U-Haul Moving & Storage of Brampton W 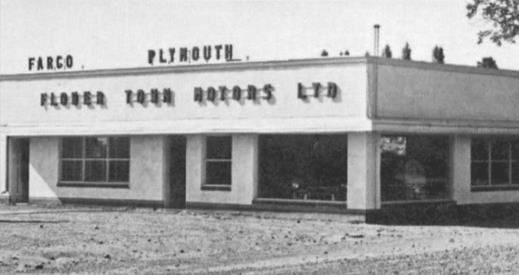 Chrysler was just making a name for themselves with the Plymouth and DeSoto brands when they acquired and reimagined the Fargo Motor Corporation in 1928. The Fargo name was used to build and sell rebranded Dodge trucks. The Fargo line of vehicles experienced extremely low sales in the U.S., so Chrysler began to exclusively sell the Fargo branded vehicles as exports. The Fargo branded vehicle would be offered in Canada until 1972.

Between 1942 and 1945 virtually all civilian car production was suspended, as the automotive industry turned its factories to the task of filling defense contracts. Chrysler built more than 25,000 Sherman and Pershing tanks during World War II. After the end of WWII, and as resource supply slowly rebuilt, local car dealerships began to resume business. Flower Town Motors was built in 1951 as a Chrysler dealership carrying Plymouth and Fargo branded motor vehicles. Within four years, Chrysler changed the world when they partnered with Philco to develop the first all-transistor car radio in 1955.

Serving U-Haul customers since 1980, this facility was built through adaptive reuse of an abandoned building. Adaptive Reuse promotes infill development in an effort to strengthen communities, with the following benefits achieved at this site:

Energy-efficiency and waste-reduction programs at this facility provide the following estimated benefits each year for the Brampton community: