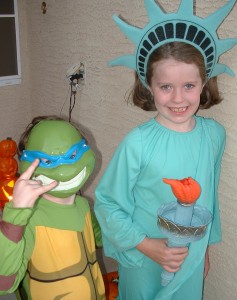 What do The Statue of Liberty, Alice in Wonderland, Christmas Morning*, Zombie football players and Bacon all have in common?  Those are some of the Halloween costumes my kids have used over the years! Some I want to keep forever; others I had no choice but to let them become play costumes (or jammies) after the candy collecting was over.  How you store Halloween costumes after the big night really depends on the ages of the people that wore them, how often they might be worn after Halloween night, and whether or not you want to preserve them to be worn years into the future.

Baby’s first Halloween costume is precious. It’s one that your child will probably never wear again as they grow so much between their first and second Halloween, and if you’re like me, each kid needs to have their very own.  I have my kids’ first Halloween costumes wrapped in acid-free tissue paper and stored in a plastic container with other baby clothes and mementos.  My daughter was only 3 months old on her first Halloween, and I think she was dressed like that little pumpkin just long enough for a photo.  My son was crawling on his first Halloween though, and has always had a knack for getting filthy in 5 minutes, so I had to wash his Tigger costume before storing it. Even the tiniest stain can break down the garment fibers during storage, or worse, attract pests!

When they’re little, your kids might be interested in wearing their costume after the parties and trick-or-treating are over. When they were between the ages of 2 and 8, my kids usually got my money’s worth out of costumes by wearing them to play pretend in the weeks and months after Halloween.  I found that the best thing to do with these costumes was to store them in a plastic bin near the toy box so the kids could have easy access to the costumes.  Some of the plastic masks weren’t well made and didn’t last as long as the fabric costumes, so I recommend finding a place where you could hang them on the wall instead of tossing them into the plastic bin like I did.

For kid costumes or grown-up costumes that you want to store with the intention of wearing them again, you have a few options.  I have had this awesome witch costume since the early 1990s that has stayed in good shape hanging in the closet with the rest of my clothes. I pull it out every year to wear while I sit in my driveway handing out candy and scaring the little ones.  The hat is really tall and pointy, and the only way I’ve found to store that without smashing it is to put it in its own box.  You can stuff the tall part of a hat with Enviro-Bubble® wrap to keep it from losing shape.  Rubber masks can be stored the same way, or you can invest in head shaped piece of Styrofoam to place the mask on while it’s being stored.

If you don’t have room in your closet to hang your costumes, then there are a couple of other options for storage.  Vacuum-sealed bags are always handy for any garment storage, and they definitely help keep dust and pests out.  A plastic bin or even a box will probably work just fine, especially if you use the costume annually.  If there are costume parts that can’t be stored flat, stuff them with Enviro-Bubble Wrap or acid-free tissue paper to help them keep shape while they’re in storage.  And like the baby costumes, grown-up costumes should be laundered before you store them away for a year to help prevent the material from breaking down.

What was your favorite Halloween costume, and what happened to it after the big day was over?  Share your feedback in the comments section below!

* Yes, Christmas Morning is a costume.  One of the best last-minute costumes I’ve ever put together.  Christmas pajamas, Santa hat, a battery operated string of lights, and a bunch of crumpled up wrapping paper and bows taped to the pajamas.

Tips for Moving into a Haunted House