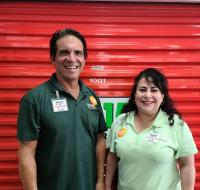 Choose U-Haul as Your Storage Place in San Antonio, Texas, 78238

Conveniently located at 5420 Grissom Rd 215, U-Haul Moving & Storage at Grissom Rd is one of U-Haul’s premier self-storage facilities. Offering a clean, dry and secure environment, this storage facility has no cost to reserve and offers a wide range of options for customers' storage needs.

The online was no help. Being a split level building I wasn’t clear that there would be stairs rather than an elevator. No problem for the staff he got me into another unit although it cost more for the same size unit with out climate control which I think is backwards. Other than that it was great.

One particular rep was very rude

Facility is top notch. Pricing is competative with other local self storage. I would recommend coming down in price a few dollars to really beat the others.

I moved to San Antonio from California. I made my arrangements to use the Grissom U Haul over the internet. I did not expect the customer service that i received. It was a relief to deal with a company that still understands 'customer service" Thank you

This is the best U-Haul Facility, staff and overall experience I have ever been part of. This facility and staff should be the training plan for all U-Haul locations. The facility was spotless and easy to navigate with my truck and trailer and the staff went above and beyond in customer service. I observed them working with other customers as well and they treated them as well as they treated me. These folks deserve a customer service award if you have one. Thank you Martin and your fantastic staff.

I have to assume that my experience was related to the facility being understaffed. It appeared to me that when we came in and rented a storage unit and tried to rent a truck, there were workers that were either too lazy to do anything, or had actually clocked out but were still in the building, in sight of customers. The manager was in such a rush that it was impossible for us to fully understand what was happening and retain the information being presented. The next day when i picked up the truck, it turned out that whereas I thought i had rented the truck, i had only reserved it. When I returned the truck, I waited fifteen minutes for someone to show up and check the truck in. No one ever did. When I went to the Installation Bay, the fellow there was borderline rude, but was clearly belligerent in issuing instructions for me to wait in the truck and someone would be right out. Well, first off, I have a high level of education and have worked professionally as someone who writes for a living. I had read the sign and remembered having been told when renting the truck to wait with the vehicle. However, there is a limit to waiting. After dealing with Grizzly Adams and his attitude, I returned to the truck, waited another fifteen minutes, and when still no one had shown up, I started toward the sales floor to ask again, just how long I was supposed to wait. This time, there was a fellow walking out toward the check-in area, and I asked him if he was the checkin person. He said yes, but then he listed off three or four other things he had to do before he could get to me. He said if i wanted, i could just leave the keys in the truck--which I did. However, I DID take videos of the truck interior and exterior as well as the instrument panel, gas gauge, mileage, etc. While this will not keep me from doing business with UHaul again, I will certainly take a book or laptop and movie with me next time.

Manager was very rude with me. Kept rushing me. If I would have read the reviews before I wouldn't have done business with them. It was mainly because of you Martin. You need customer service training. I couldn't stay there after my experience with him. The other employees were great, they just have poor leadership.

Very helpful and accommodating staff. Decent prices and good promotions, would definitely recommend to others.

Brandon was amazing!! He was super helpful and nice. He greeted me with a smile and was knowledgeable in all things related to my truck rental to my storage unit.

During a very difficult transition in my life, U-Haul proved to be a place I could count on and trust to help me on my journey. Which has made my journey just a little bit...no alot easier. Thanks U-Haul workers from Washington to Texas!

The facility is well maintained but the staff is rude, I heard the manager saying Fu#k several times and talking bad thing about workers in front of customers, very unprofessional.

The manager there has some terrible customer service skills. He is very rude and unprofessional. He is not friendly at all, I rather deal with the younger men than him. Many times I have used this store but the manager remains the same rude. Like he is always having a bad day or he doesn't like his job.

The storage facility was not controlled temperature as it stated. It was almost 100 degrees in the storage rental when I opened it. It was much cooler when I checked out. Most of the attendants were responsive and helpful. There were two that were short and non-attentive. Otherwise I would had graded it outstanding.