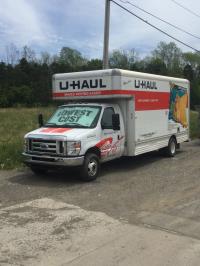 Moving to or from Angola, NY 14006? Get FREE truck rental rate quotes at Angola Food Mart. rental trucks are specifically engineered from the ground up to assist moving families, not freight. Our moving trucks have more safety features than other moving trucks in the industry including gentle ride suspension and high visibility mirrors to assist the driver. Whether you are moving a smaller apartment or a large four-bedroom house, truck rentals in Angola, NY will provide you with the moving truck rental you need to get from point A to point B. Find the perfect size moving truck to assist with your move, is home of the $19.95 rental truck!

Simply click on each moving truck shown above to view individual truck specs including: safety features, towing capacity, fuel economy and of course, the available space-per-truck size. Each rental truck is individually priced to help save you money, time and energy on your move to or from Angola, NY.

U-Haul cargo van rentals and pickup trucks in Angola, NY are perfect for home improvement projects, deliveries and other small loads. Rent cargo vans or pickups to save money on local moving or deliveries. Cargo van and pickup truck rentals are popular with local business, college students and smaller housing moves in Angola, NY 14006. Our moving van rentals include air conditioning, rub rails to protect your belongings and come equipped with a hitch to tow a trailer rental. is the home of the $19.95 cargo van rental in Angola, NY, reserve a van for your moving needs from Angola Food Mart!

Employees were very helpful and friendly and efficient

A bit of a long ride to pick up due to equipment shortage.

Terrible experience. I will not rent uhaul online ever again. Its a hassle and big waste of time.

My pick up location was Orchard Park. U-Haul moved me to Angola. The woman I spoke to on the phone was extremely unhelpful. This created a two+ hour delay of my trip. The guy who helped me in Angola was wonderful, but was shocked U-Haul didn't not give me a discount for the debacle THEY created. Very upsetting.

This was handled very well and professionally.

The cab was a bit dirty from cigarette ashes and the drivers side sun shade was broken but still worked. Some minor scratches and dents on the outside. I took several photos. Over all the truck was good. The customer service was spot on and he was very friendly. Great customer service!

The u haul rep charged a cleaning fee because I did not park the car hauler in the exact spot. Then charges after hours fee because I brought the hauler back when he was not there. This location is not worth it

I highly recommend this place, there were no issues.

Your UHaul Rep was very friendly and helpful. He made it easy to rent and return.

When I picked up my trailer rental the one tire was soft and the attendant told me to go fill it up at their air station. I had to spend $1.50 per use out of my own pocket to so. I could not believe what he was saying. Come to find out as I was traveling the tire had a slow leak and I stopped several times until I found out that there was a hole in the tire. I had to have it plugged at my own expense just to finish. I would like to know why the place I picked up the trailer did not do the inspection and required me to go fill the tire up. Very disappointed in this rental this time. I have used u-Haul in the past but this experience was not a pleasant one.

Bad internet service through sprint which made my drop off difficult but that's not U-Hauls fault.

Notified the agent that two of the tires on the trailer had flat spots on them due to skidding, not by me, but previous usage. He noted and took the trailer out of service. Very helpful agent!

Mobile drop off was so easy!

everything went as planned.

All went smooth and I was in and out in a matter of minutes.

"Kevin" at the Angola Food Mart was very helpful and friendly. The truck was clean and drove well. U-Haul itself was terrible. No notice was provided that my pick-up location was changed until after I went to the first location. The 24/7 check-in process did not work, and communication with U-haul via phone or chat is apparently not possible. U-haul needs to hire more call center folks to help with the automated process. If not for Kevin, I would never use U-Haul again. He was great.

Truck needed tune up on brakes, gas pedal seemed to get stuck when trying to use brakes, front end bouncing around like Rotors needed adjusting. Agent at Angola store was very cooperative, and did make notes of my complaints. I deffinitily recommend others to this facility.

As Jay, who helped me, at the Angola Food Mart, was so pleasant and helpful to work with, there is no need for improvement. I will use Angola Food Mart again as well as recommend them to others I know who have a need for U-Haul. Peter Radon

Was charged extra for going 15 miles over the allotted mileage but returned vehicle a day early and 1/8 more gas than was required. Sounds like a pretty crappy deal for being early and exceeding amounts.

This is the second time we have rented a U-Haul from this location. Both times the employees have been friendly and professional. The vehicle we requested was waiting for us, and we would recommend this location if anyone we know needs a U-Haul

Have the truck better prepared for customer use in winter months. It was covered in snow and ice. The rear cargo door was frozen shut.

Hire more workers to run the gas station and the u haul side. Update computer equipment.

Very smooth transaction. Very happy with everything. Thank you

I'm extremely disappointed in being redirected to this location in Angola, NY to pick up my requested vehicle. I specifically chose a location in West Seneca, NY as it was close to the location where we were moving a family member. The redirect in pick up locations caused several hours in lost loading time as was a missed appointment with assistance that had been hired for specific hours during the day to help in loading the truck. The location in Angola also did not have an adequate supply in furniture blankets which forced me to travel back to the original location in West Seneca, NY to pick up additional blankets just to cover the minimum quantity requested during the on line reservation process. In general, the experience with U Haul in New York State was extremely frustrating, and unacceptable as far as customer service.